Benn from Australia feedback about Best of Russia Tour 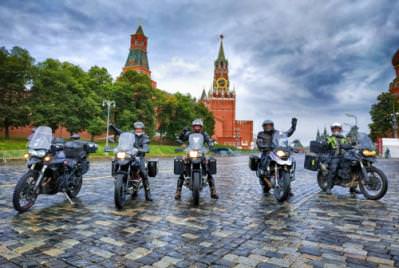 Ever since I was young I always dreamed of taking off on adventure like this with my best friend . A few months ago a phone call ended with “Righto, let’s get this shit happening !!” In the space of a few months we picked the tour we both liked , sorted visa’s to enter Vlad’s land , organised flights and before you knew it we were off .

Taking off from Melbourne on July 31st the long journey to Mother Russia began.

Upon arrival into Russia we spent a few days in Moscow, wowed by the size, colour and design of Monuments and Architecture , the history dripping from everything our eyes saw , the on going development evolving everywhere with streets, pavement’s, footpaths, parks, infrastructure and gardens all taking on a modern fresh and funky style.

This look with Moscow’s colourful and historic architecture is just incredible to see. Genuine excitement filling our veins everywhere we went. A guided tour of the city to famous landmarks, orthodox churches, Red Square ,the underground metro stations (60 metres below ground), Bunker 42, Gorky Park and other locations just completely blew our minds......and we barely scratched the surface. Moscow alone has so much more to see and offer.

We met our team at the front of Bagration Hotel and get shown to our bikes, they are BMW 700 GS semi enduro, two side box’s and a top rear mounted box for storage, they are in excellent condition these bikes. Later that evening we are taken to dinner by Artem Kurganov (Tour Lead Rider) and Mikhail Bibichkov (Tour Guide Rider controlling the back of the team), we meet our new friend Robert Junqueira from San Paolo Brazil, Leigh and myself, a nice small size team which we realised later in the trip was an absolute blessing. We tasted the first of many traditional Russian dishes and cuisine. Amazing.

The following day we would start an adventure of a lifetime. We rise early morning and pack our bikes with riding gear and clothing for the next 12 days, then have the first (of what was to become daily) briefing of the days ride ahead which covered details of road conditions, traffic expectation, weather, coffee stops, refuelling , kms to travel, lunch breaks, accommodation, you name it, these boys that work for Russian Moto Travel company were all over it . No stone was left unturned. Impressed from the very start.

The first priority leaving that first morning was the photo shoot out the front of Red Square, this had to be quick as it’s not really allowed. There are many Russian military guards all over this area and the recent protests in Moscow meant that security was a bit tighter than usual, we even missed out on our tour of the Kremlin the previous day.

From there we took off through the busy streets of Moscow and made our way on to the motorway heading toward Tver, our first nights accommodation was at Valday Eco Lodge, a short 420 km ride away. We got a very quick idea of what to expect on Russian roads with fast drivers, fast riding, over cast dry conditions then heavy pelting rain.

I forgot my pinlock (anti fog lense insert) at home so I basically rode partially blind once the rain started, my helmet completely fogged over and riding at $1.50 in the wet with little vision wasn’t the greatest I can assure you.

We arrive safe and experience our first Russia Banya, wasn’t this a buzz of an experience, 105-110 degrees Celsius melting in a sauna then the laughter and running nude through a resort to jump into freezing water off the end of a jetty was an experience I will never forget. You repeat this process several times so you can imagine the shenanigans were well under way from this point on.

Our rides were on all sorts of roads and in all sorts of weather conditions, wet weather riding gear was used quite a bit. It just made the experience so much more unbelievable. There were roads so pot holed it was zig zag riding to avoid them, patched up roads so bad that it vibrated your forearms and massaged your spine all at the same time, dirt roads with slippery slimy mud that you couldn’t go quick on, dusty dirt roads full of holes and dips that was complete stand up riding to guide your way through and keep your head above the riders dust in front. We rode in formation most of the time trying to maintain around a 3 second gap between us.

There were days of just fresh brand new highways where you just ripped your wrist backward and cranked the throttle and let your body and bike guide you round and through the corners. Long overtakes where you gear down and punch it, an incredible buzz hitting full speed but the bike does start to wobble around $1.70, the short sharp riding with lots of corners close together, up and over hills, down through twisting corners, the confidence growing when you knew the tyres were warm and really laying the bike down and powering through the turns. It was riding heaven the whole trip, the thrill from start to finish I just can’t entirely capture with words.

We visited 21 cities in 12 days, traveled over 3000 kms and passed through quite a few towns also, we saw the very very rich and the very very poor areas, the middle class seemed to limited. Each and every time we stopped at a museum or monastery, a Kremlin or a war memorial our guides knew all the history of the place and taught us so much about Russian history.

I can’t explain how moved I was upon hearing some of the stories, hundreds of thousands of people killed and wounded sometimes just in one region, they are as proud of their history as we are of ours in Australia. There were monuments and statues, memorials to woman and children, who took up arms to defend their country, the forest is so dense that sometimes people went in to hide and got lost, sometimes never to be seen again, fighting for your life in there would have been horrible, unimaginable. It wasn’t just world war 1 or 2, it goes back further than that, centuries of fighting, it was just incredibly moving to be standing where this kind of life and time took place.

Fortresses are still in place and in good condition and you get to see how even centuries ago the thinking of men and women was really advanced, underground tunnels and secret hatches and entrances that led to waterways or to safety. The strength of the design and materials used still standing or holding up to this very day. And just for the record, FUCK WAR AND FIGHTING, I wish it upon no one, not now, not ever. My heart bleeds for anyone involved in it then or now. God bless them all.

We took in so much in such a short time, our first rest day was Saint-Petersburg, an EPIC city, again the history and architecture here makes your neck snap side to side trying to absorb all you can. The grandiose and size of the place is unimaginable without seeing it with your own eyes, we went to Peterhof (Peter the Great summer pad) by boat, over 150 water fountains that use head pressure to operate, no pumps. Golden statues that grace the long canal entrance to the place, only the privileged and elite were invited there back when he ruled.

Then to Winter Palace in the heart of SPB and it’s museum. There is art, paintings by Rembrandt and Michael Angelo to name a few, oh and that other fella they called Leonardo Davinci, so much memorabilia, gold and ornaments in this museum that if you stood at each piece for one minute from 9 am to 6 pm Monday to Friday, it would take you 8 years to see the entire collection.

It has a wealth about it I can only compare to somewhere like Dubai, I would nearly go as far as saying it has more wealth than Dubai. The Granite column that center pieces the court yard weighs an impressive 600 tonne and was erected by ropes and pullies centuries ago. It is free standing with nothing securing it to the ground, it’s weight alone keeps it in place.

The night before this tour of SPB we went out on the town, all of us, the sensible members of the team left at a reasonable hour, Leigh and I on the other hand... well let’s just say we kicked on for a little bit too long, the bar we were at I don’t think they were used to that kind of laughter and joking with each other, vodka in that many different ways I didn’t know existed until I went to Russia, the home of the clear spirit.

Man can those guys not only drink it but also serve it to you in ways that blow your mind, I’m sure I drank one that was on fire... literally.

Due to our lack of speaking their native language, our taxi ride back to our hotel delivered us to the wrong Holiday Inn, who would have thought there would be two in the city?? Arriving back at the right hotel at 3 am we thought we would let Roberto know we were back, then a fire alarm going off (not us) poor man didn’t need to be woken up like that. Apologies Roberto for scaring the living crap out of you. It’s fair to say the pair of us were a complete shambles the next day for the tour, we pulled it together though and soldiered on well.

We thought it would be a good idea to video message a lot of our friends while we toured, having a complete disregard for the time difference, and also being pretty full to the brim on a variety of beverages, some nights the videos were sent at a relentless rate and contained running commentary of everything we were up to. We found it to be a lot of fun, I hope the most of it was received well, I know I definitely got a tad carried away some nights, but we just wanted to share the fun we were having.

I could go on and on about this trip, I’m still tingling as I write this. I even learnt to speak a little Russian . For anyone who has watched our posts and commented on facebook, liked or loved what you have seen.... Thank you for taking an interest. I have separated videos to show the ride itself, then places we have seen and one showing the nights out and the “shenanigans” we got up to.

And for anyone who who is still wondering “Why Russia”, I hope the videos I am about to post no longer leave you wondering but perhaps encourage you to add it to your bucket list and see it for yourself one day.

To the best friend a person could wish for in life, Leigh Adamson , thank you for bringing the best out in me, at a time when I needed it most. Just like our life long friendship, that was one hell of a ride. Love ya Brother. 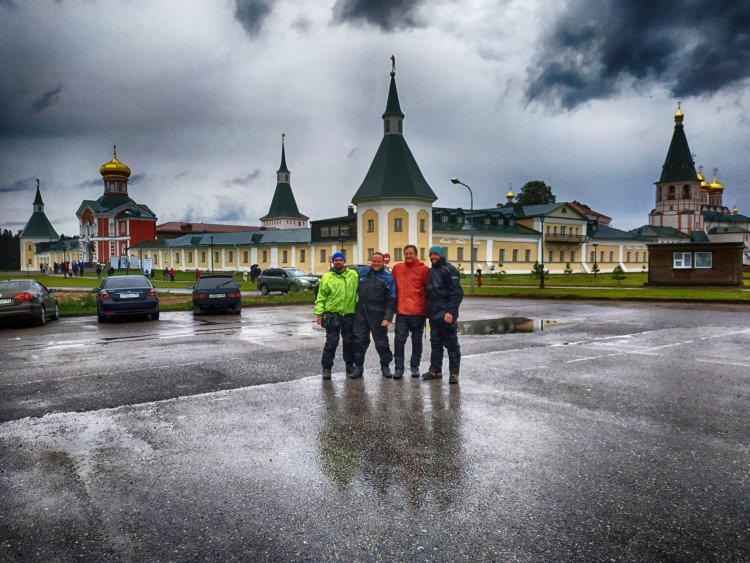 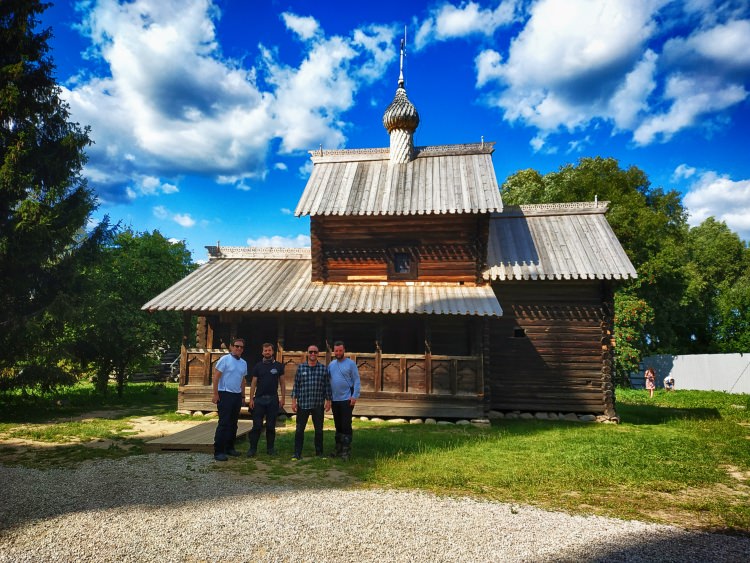 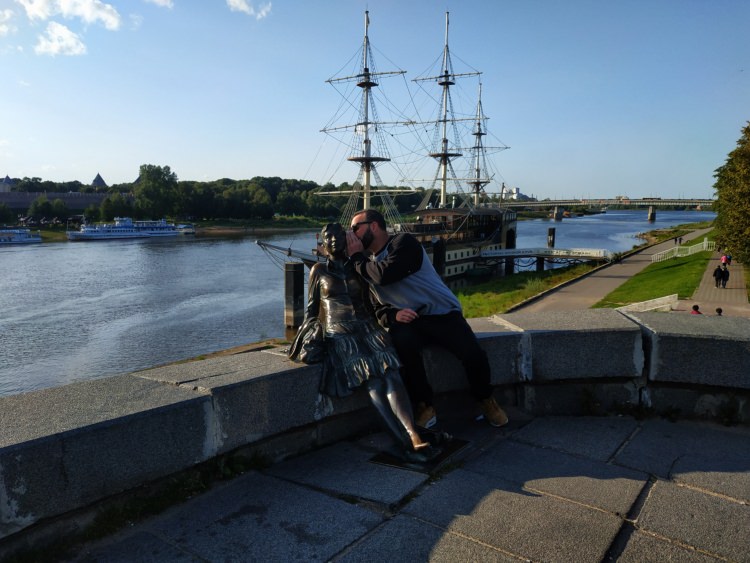 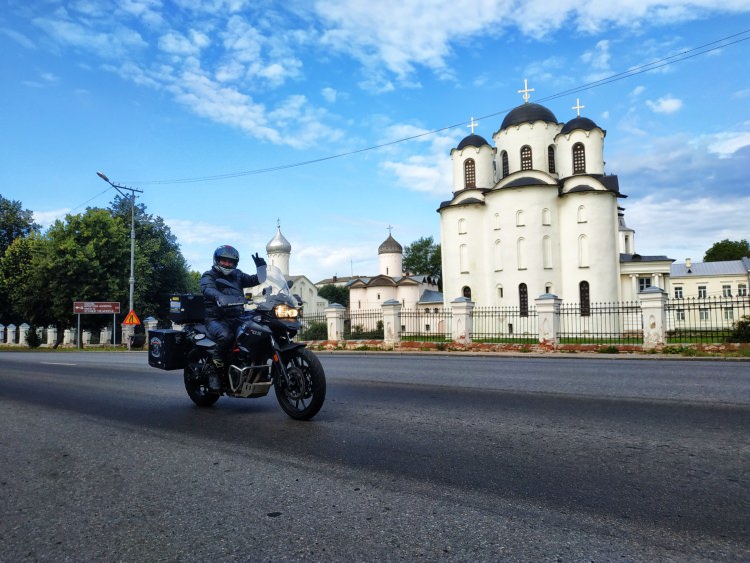 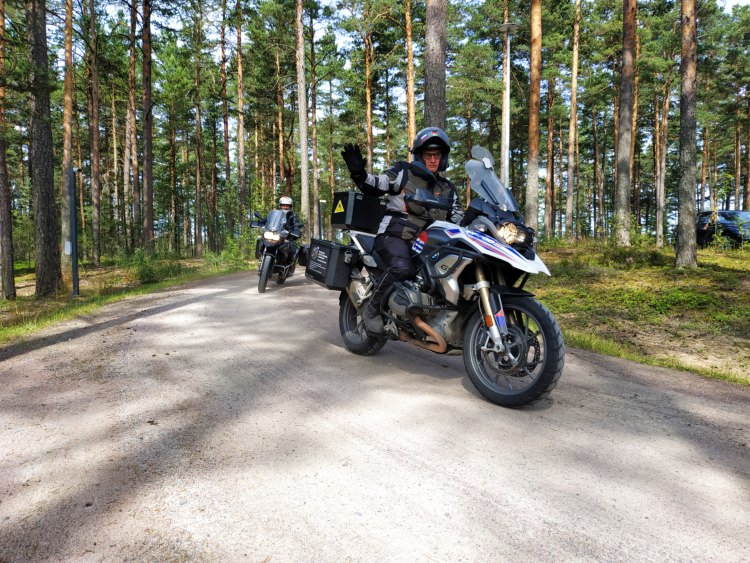 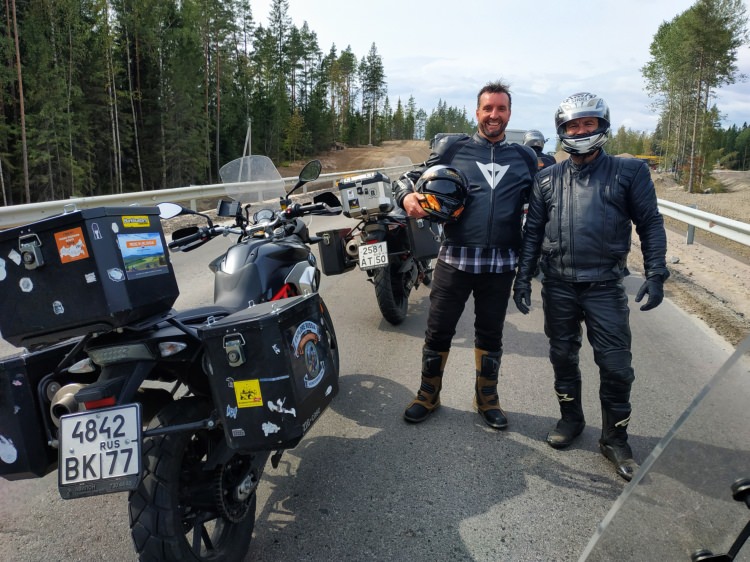 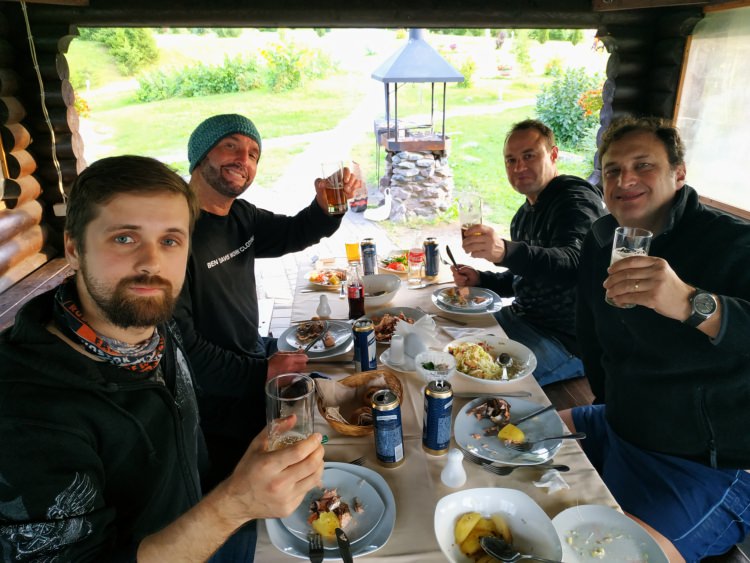 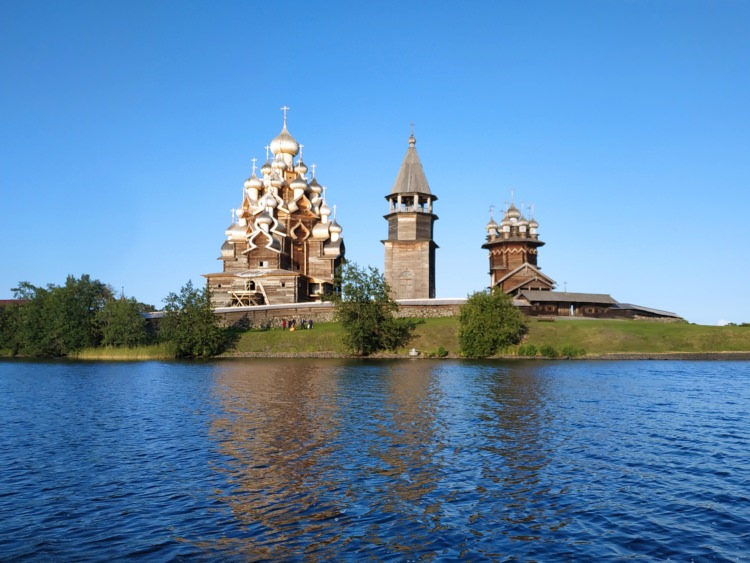 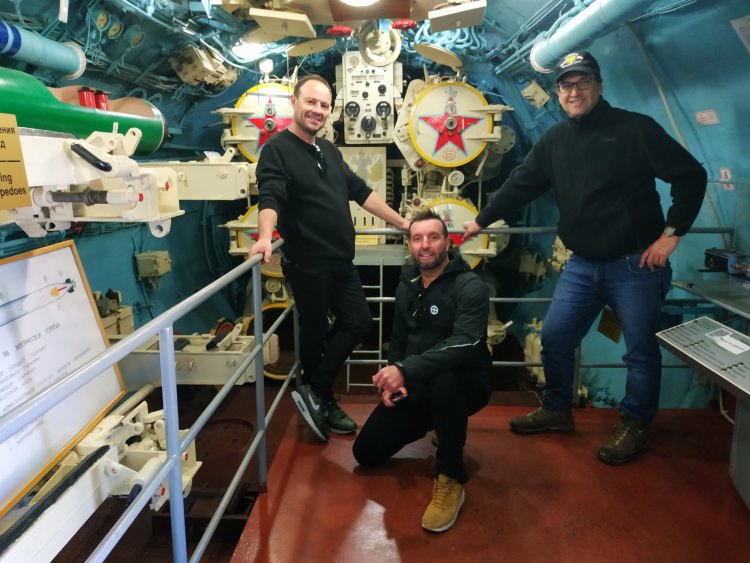 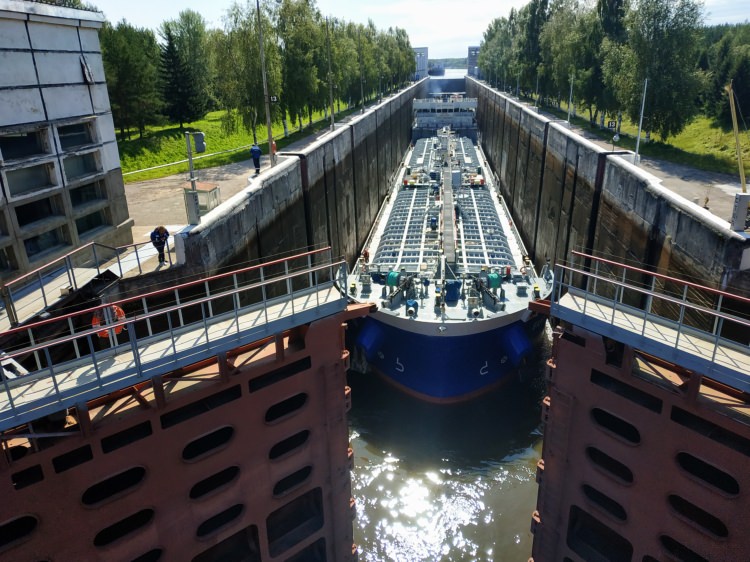 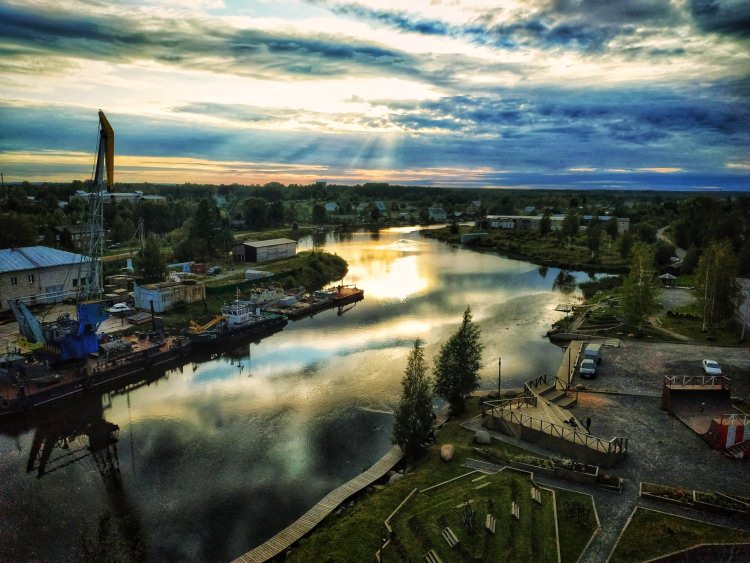 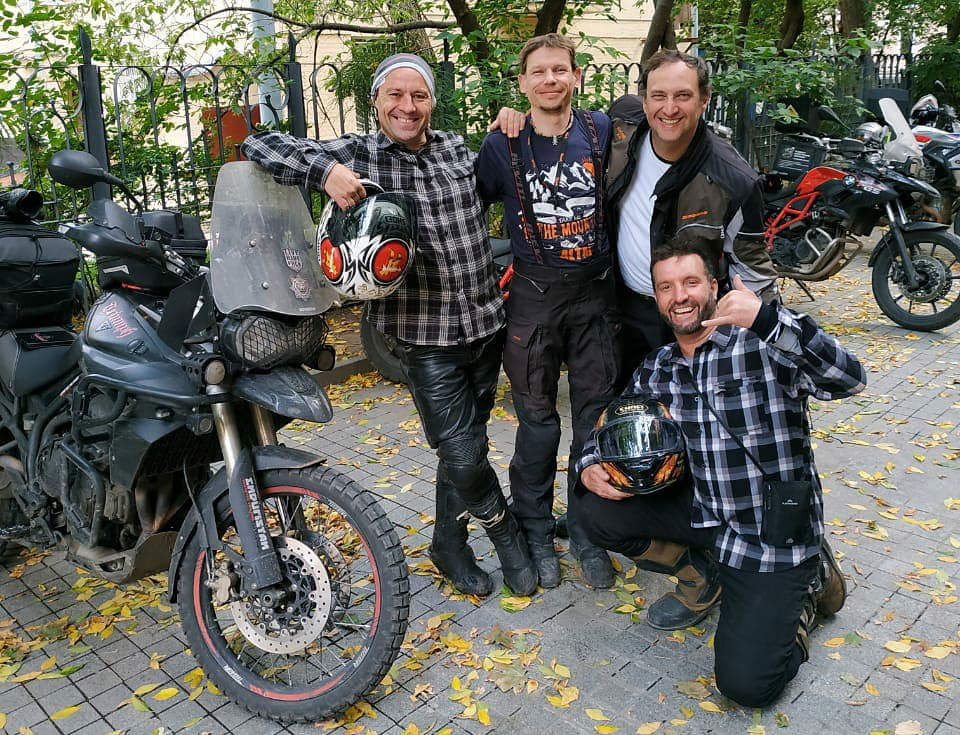