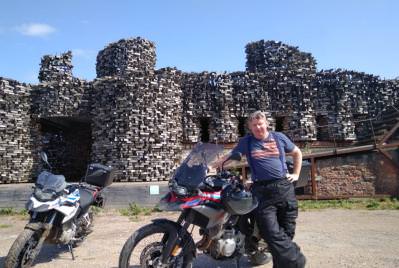 What is the best way to try new F750/F850GS? Bring this bike to the landscapes they were made for, for example to the Nikola Lenivetsk – an architectural and open-air landscape park with interesting installations, beautiful nature and a lot of off-road in the Kaluga region.

Early in the morning on Friday we leave Moscow in the direction of the Kaluga region on four motorcycles: three of them are new BMW F850GS just from the dealer, riders are Kirill, Artyom and Igor. The fourth member of our group is Eugene on the Suzuki DL-650 V Strom.

Just from the very beginning we were fall into the rain. We dress our raincoats and rush forward, slicing through the water. At the first stop we refuel with coffee and arrange a light breakfast at Chekhov Café in Zvenigorod. Well, the great Russian writer knew where to stop for a snack.

During our coffee break the clouds went away, and the sun came out, but unfortunately not for long. Just an hour later, after visiting the Ruza Kremlin, we are finally covered by a thunderstorm front, and for the next couple of hours we turn into pilots of jet boats.

We continue our ride and next stop is on the territory of the Pafnuti-Borovsky monastery. Here we walk around the ancient shrine, get acquainted with its history and admire the splendor of the ancient frescoes of the holy cloister.

After that we go forward to Nikola-Lenivets Park. The park is a cluster of many art objects, spread out on the territory of the national reserve Ugra. We are settling in the rooms of a rather interesting look (small wooden rooms on the open air in the forest with a shared bathroom in a separate building), just before the sky fall raged with a new force.

Lightning disabled communications and power supply. And if the light appeared within 20 minutes, seems like the Internet dropped for the whole weekend. Maybe it is even better, because we managed to spend more time on live communication and the study of the surrounding objects of art.

In our cafe, which was located next door to with our rooms/campsite, for some reason there were no strong alcohol at all. But it was vitally needed for the travelers who were soaked and tired from the road.

So we found contact on local distiller Vladimir. We drive to his house by taxi and taste his divine drinks. Inspired by the tasting, we’ve collected some stuff for the evening.

Saturday morning starting from an unexpected adventure. A raging hurricane at night dumped a couple of motorcycles into the muddy ground, as a result of which few clutches broke off at the root. Having examined the mechanism and carried out the troubleshooting, we concluded about the possibility of repair in the field. Fortunately, yesterday at the tasting, we enlisted the support of the locals in the person of Volodya.

While Eugene and Artyom went to the village for repairs, Igor and I went over to study the objects of Nikola-Lenivets. We start from the “Rotunda” closest to our camp, then we make our way to the “Storm of the Sky” which was lost in the forest. We move to the "Lazy Ziggurat" where, climbing up we survey the surroundings. Funny fact that the mobile phone worked on its top, so we was told that that the repair was a success, and the guys were already putting the damaged handles back on the motorcycles.

The second part of the day was driving. Forty kilometers from the park we visit the city with a speaking name - the Linen factory Plant, where we get acquainted with the decoration of the house of the Goncharovs' estate.

Here, in a cafe, we wait for a rainstorm that with a new force fell upon the Kaluga region. After lunch, our paths diverge. Artyom and Eugene are going to storm off-road and get meat for the dinner. Me with Igor, meanwhile, are returning to Nikola-Lenivets, where we continuing to get acquainted with Art objects in its territory.

First, we stop at the local general store, which has become an object of art with a light hand from representatives of the local creative people. Then we went to one of the main highlights of the park's, a revolutionary composition called “Beaubourg”. We slowly drive past the white gate in the direction of the AB Wowhouse Bridge leading to the Inhabited Substance; we wind up the forest paths through sculptures meticulously inscribed into the surrounding landscape.

We return to the main road, here we are waited by the “Gilded Taurus” and the path leading to the real gem of the park - the object with the telling name - “Universal Mind”. On the way, we are met by a slender row of columns, betraying the power, majesty and completeness of this monumental composition. Enchanted by the power of the object, we absorb its energy; we admire the rigorous performance and smoothness of the forms.

Time inexorably strives for the evening. We are going to the campsite, while Eugene and Artyom are back with provisions. We were beginning to start preparations for the evening dinner. Weather is challenging us once again. We miraculously manage to fire one BBQ before the pouring rain. But nevertheless, meat does not burn and as a result, the pork was juicy and tender, and the chicken browned appetizing crispy crust. The company was made up of MGIMO students located next door. For the dessert, we all made marshmallow together and discussed our favorite science fiction books.

The third day we started with a hearty, rustic breakfast. Today we have a small but interesting way back to Moscow. By secondary roads we make our way towards Kaluga, passing it along the bypass road and stop in the old district city of Tarusa on the banks of the Oka. Trade and industry at all times avoided this small town. That’s why this place was always admired by writers and poets. We’ve made a short walk through the center, taste local kvass and drive to the direction of the museum of Anton Pavlovich Chekhov.

On that way we have lunch in a wonderful home-style restaurant near Serpukhov. Here we are saying goodbye to Eugene, he was already been in these places before and decided to return home early. So we are storming Sunday traffic jams with Igor and returning to the RMT office by the evening.

After a couple of weeks, we will again return to the picturesque park of Ugra. This time the highlight of our trip will be the Archstoyanie festival.

Travel with us and you will have a rare opportunity to look behind the scenes to learn how the art of land art is born in the largest art park in Europe, Nikola-Lenivets! More information about the tour you can see here -  https://rusmototravel.com/tours/nickola-lenivets-ride-national-park-ugra 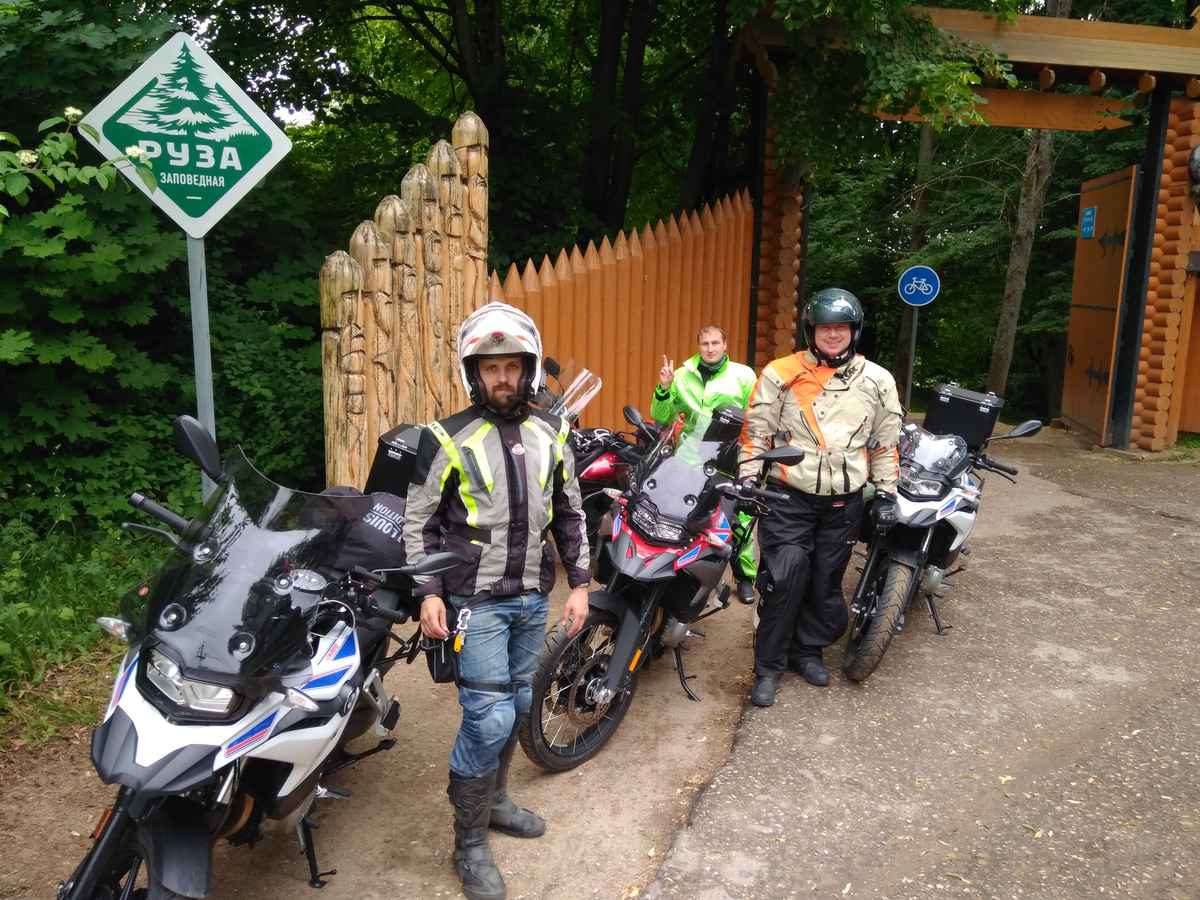 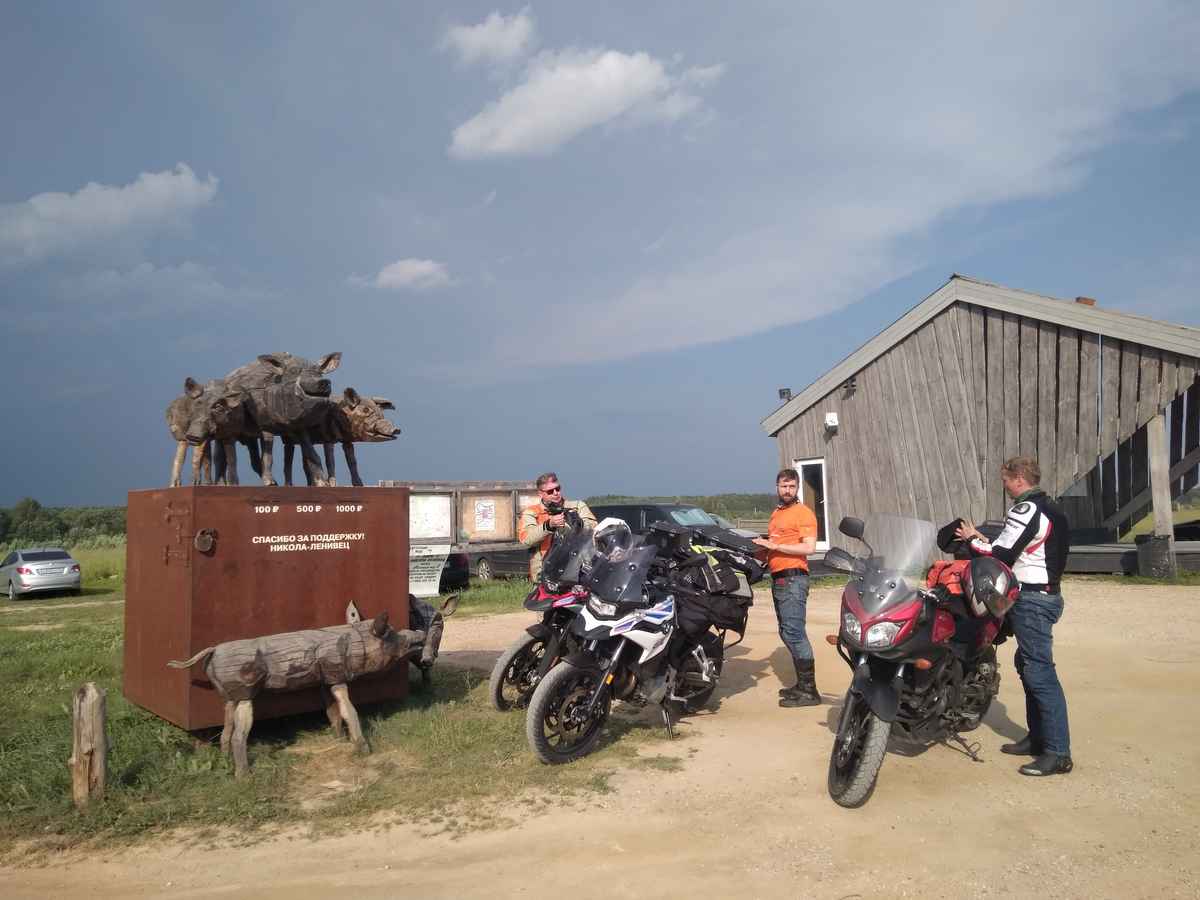 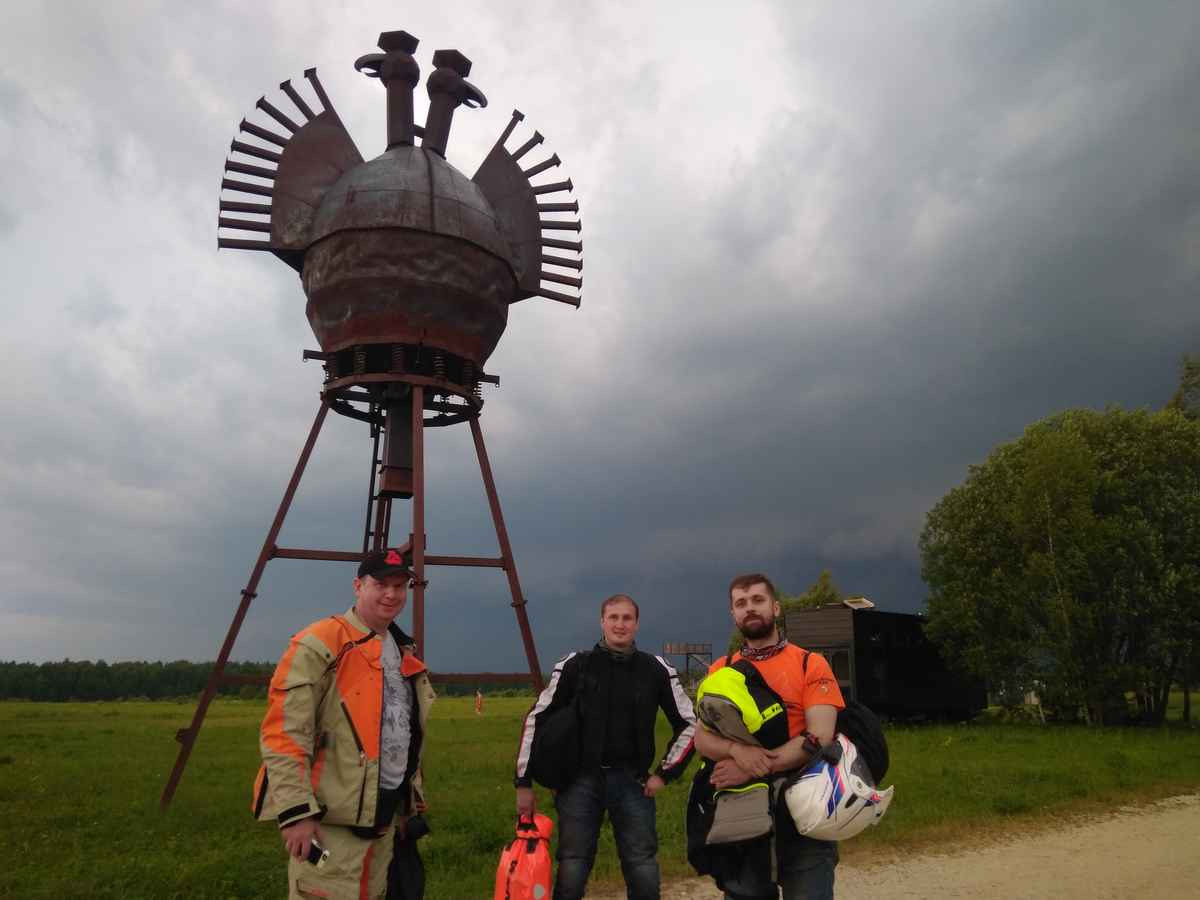 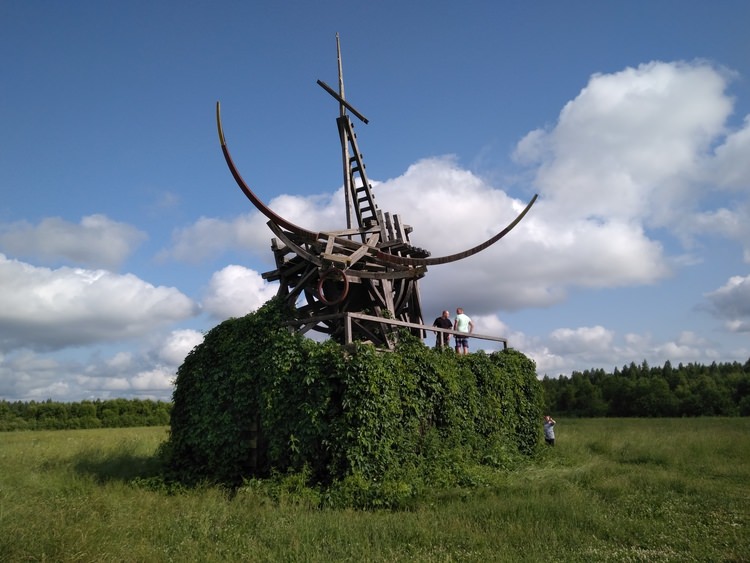 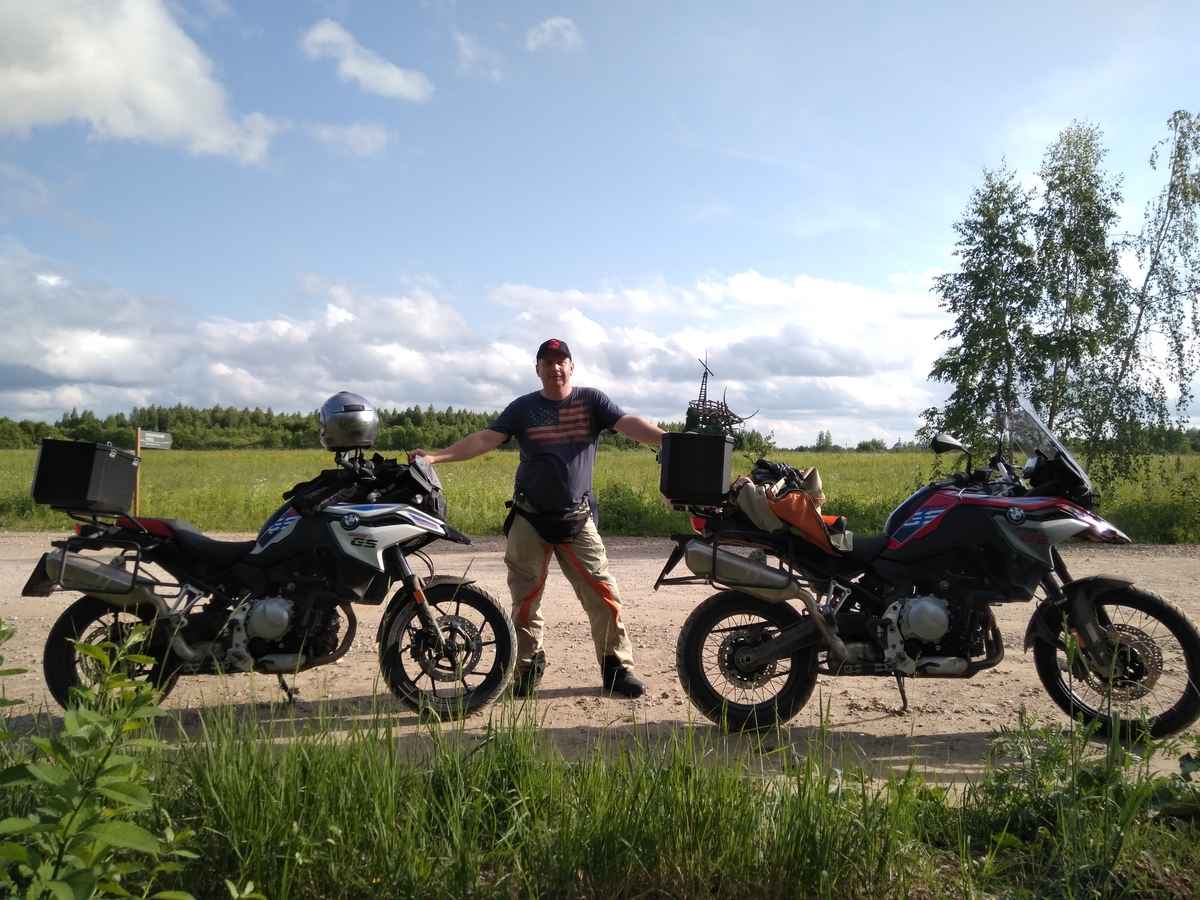 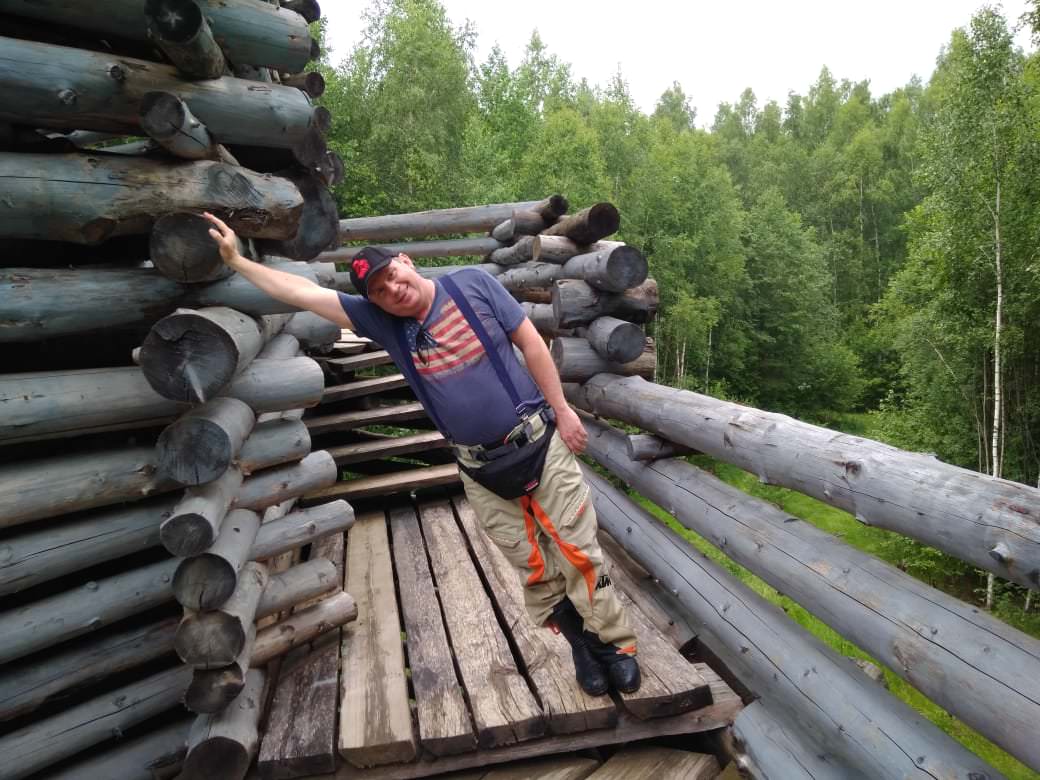 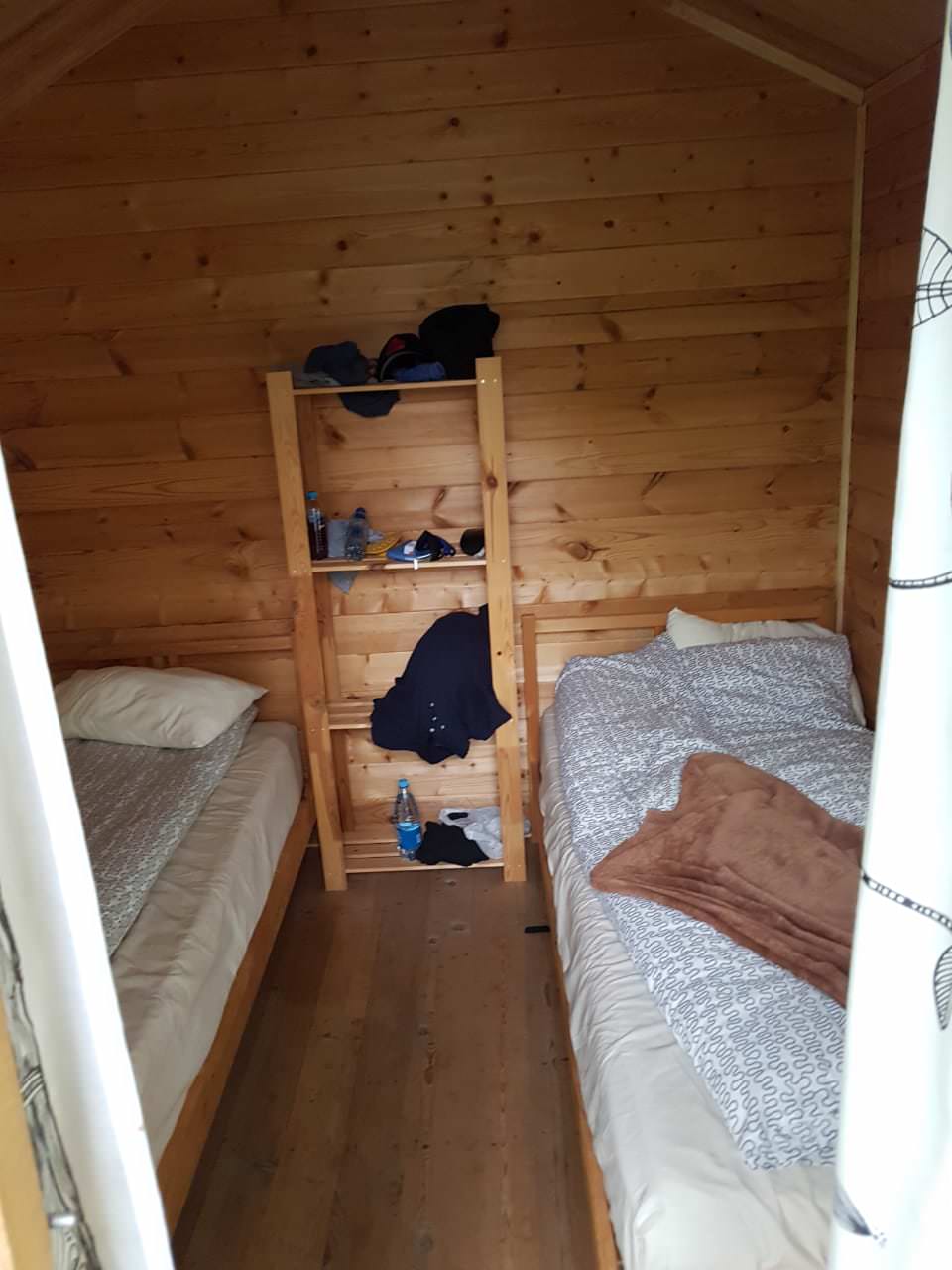 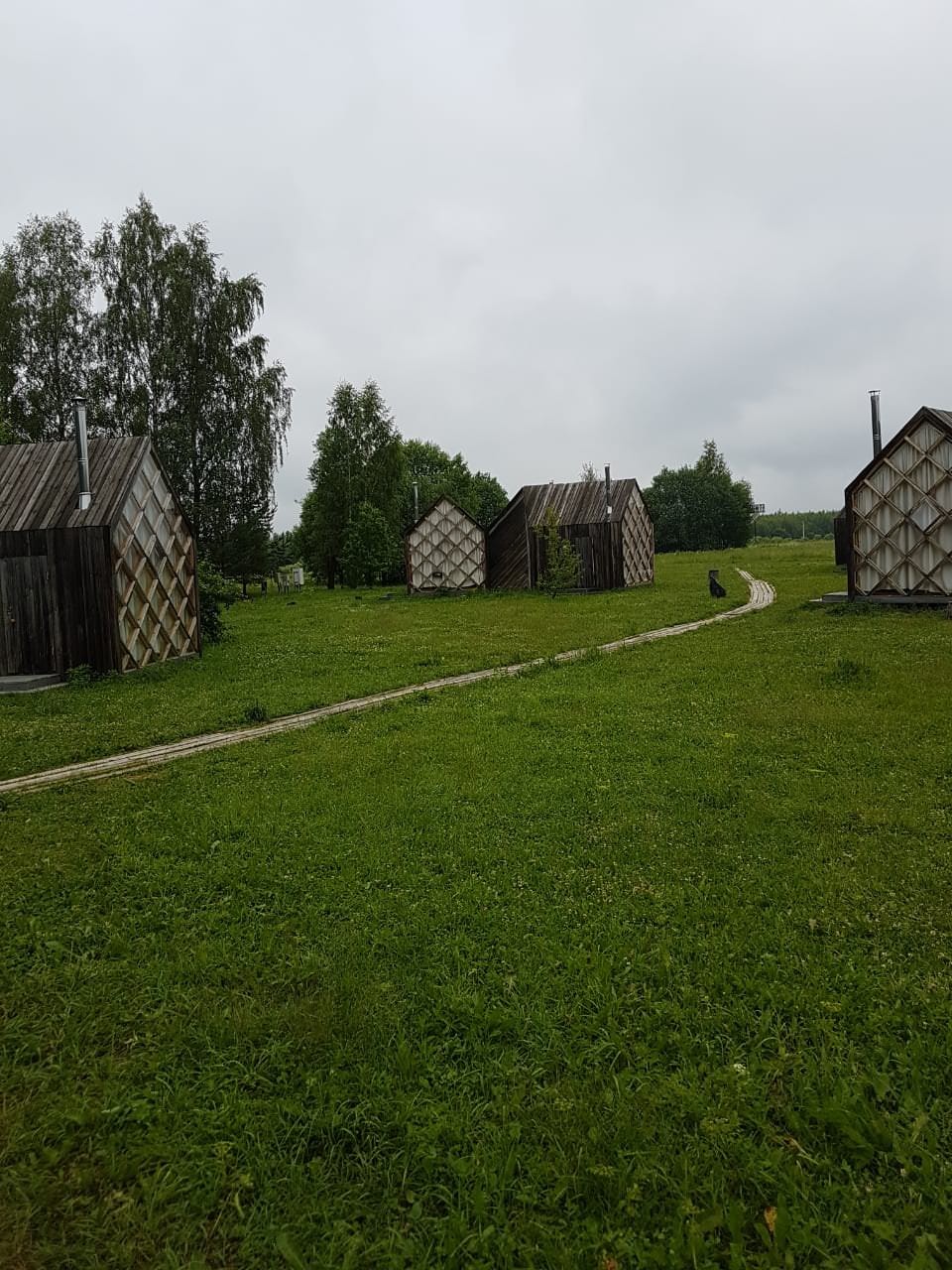 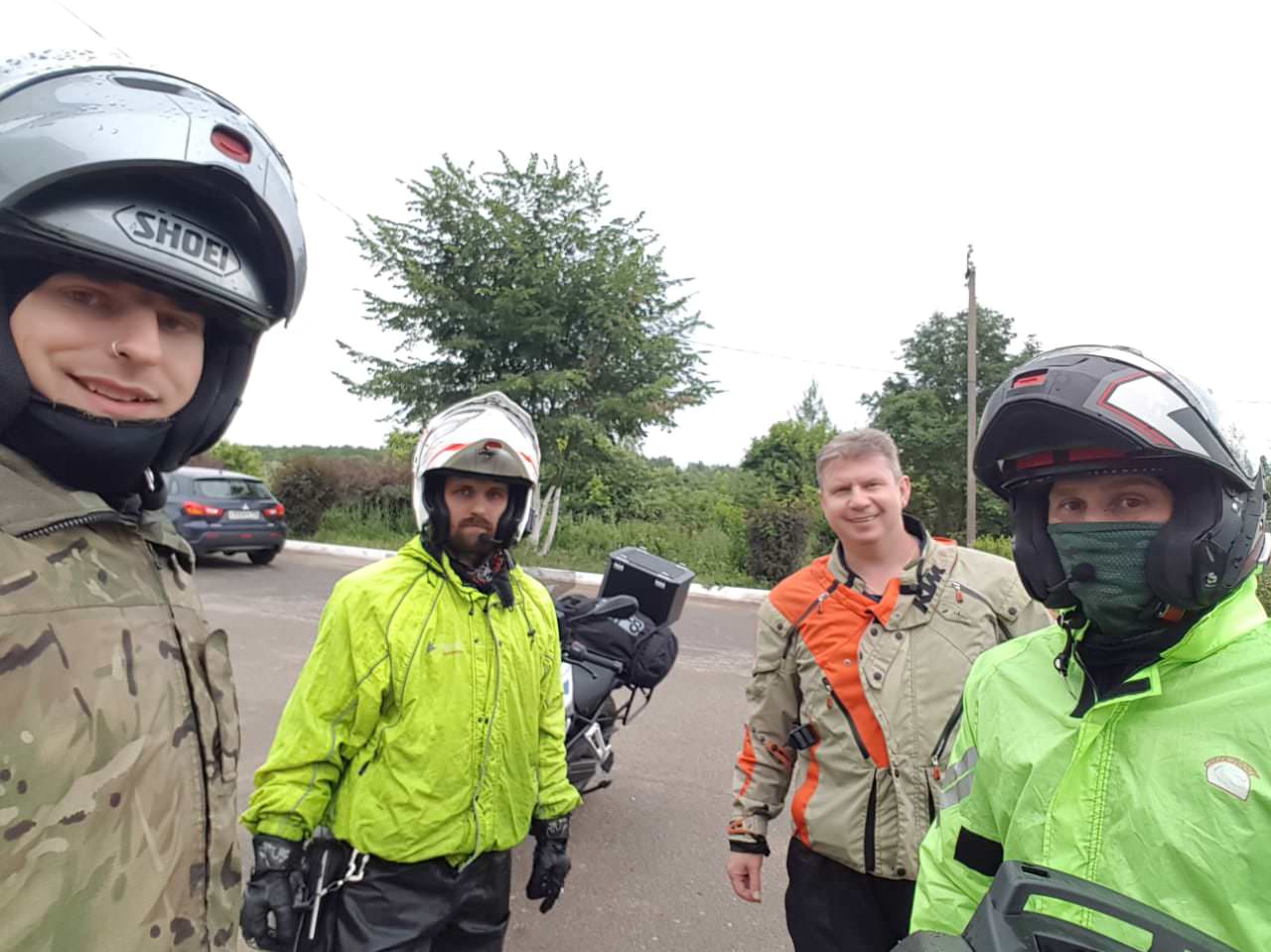 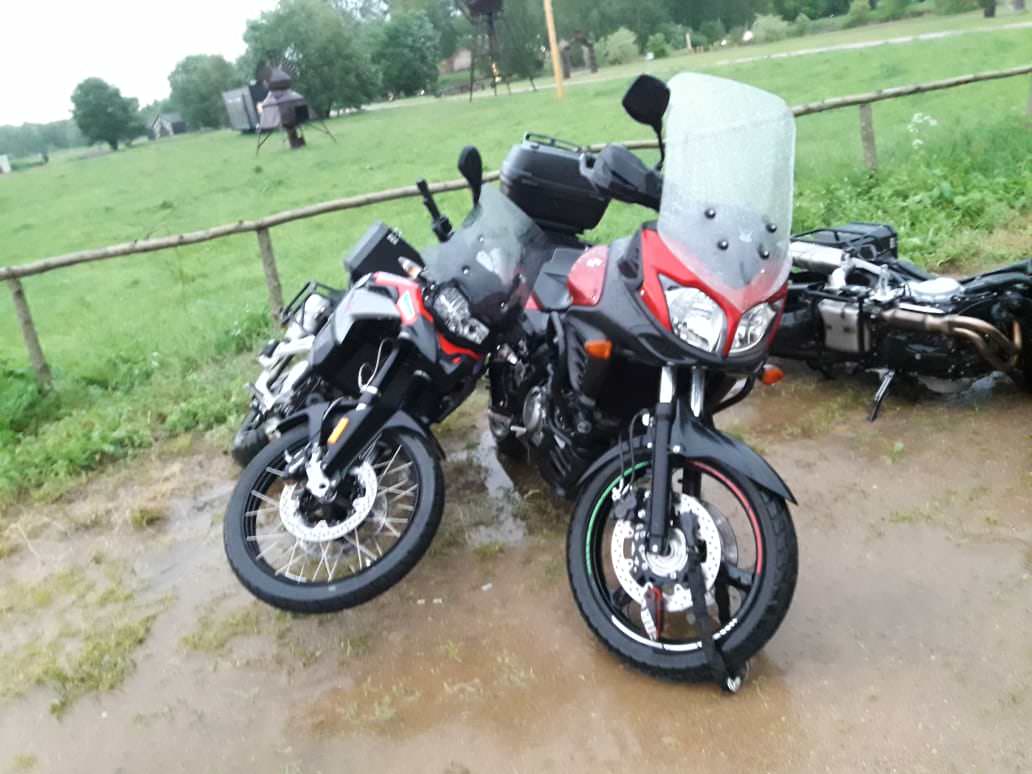 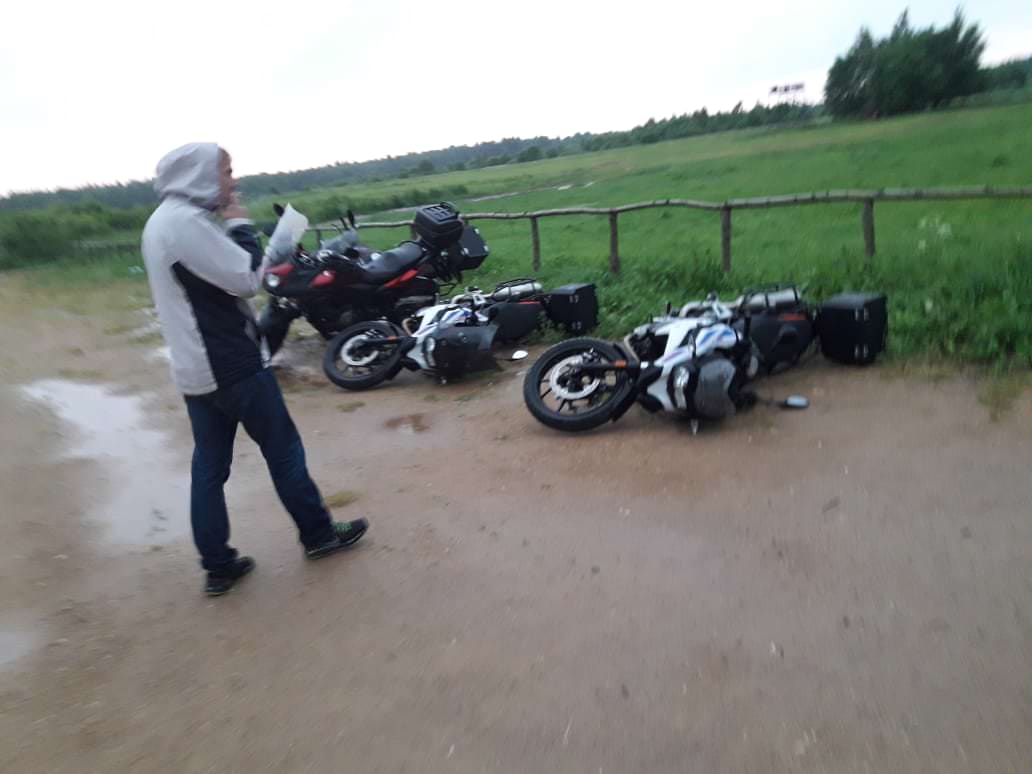 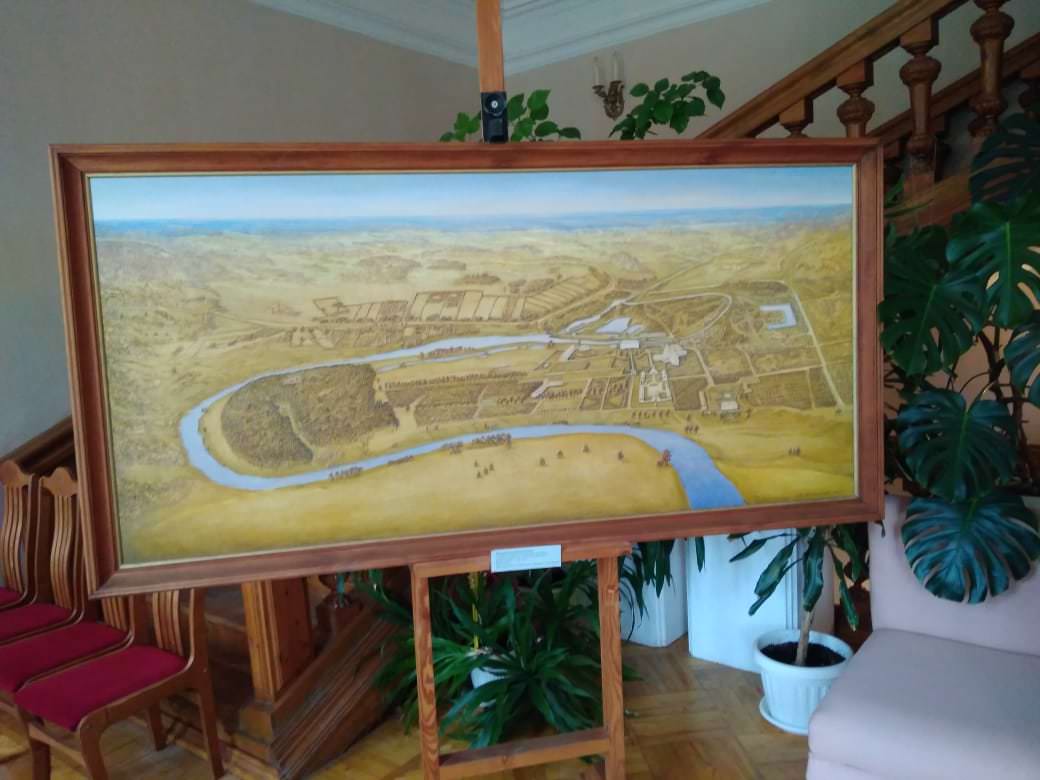 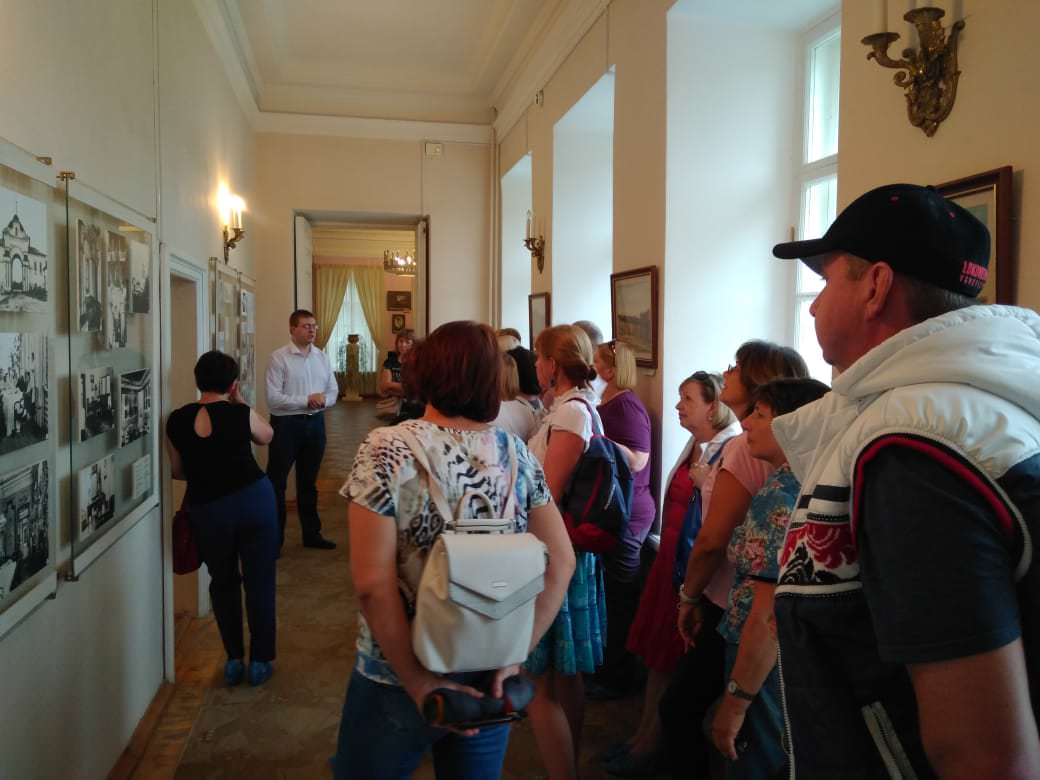 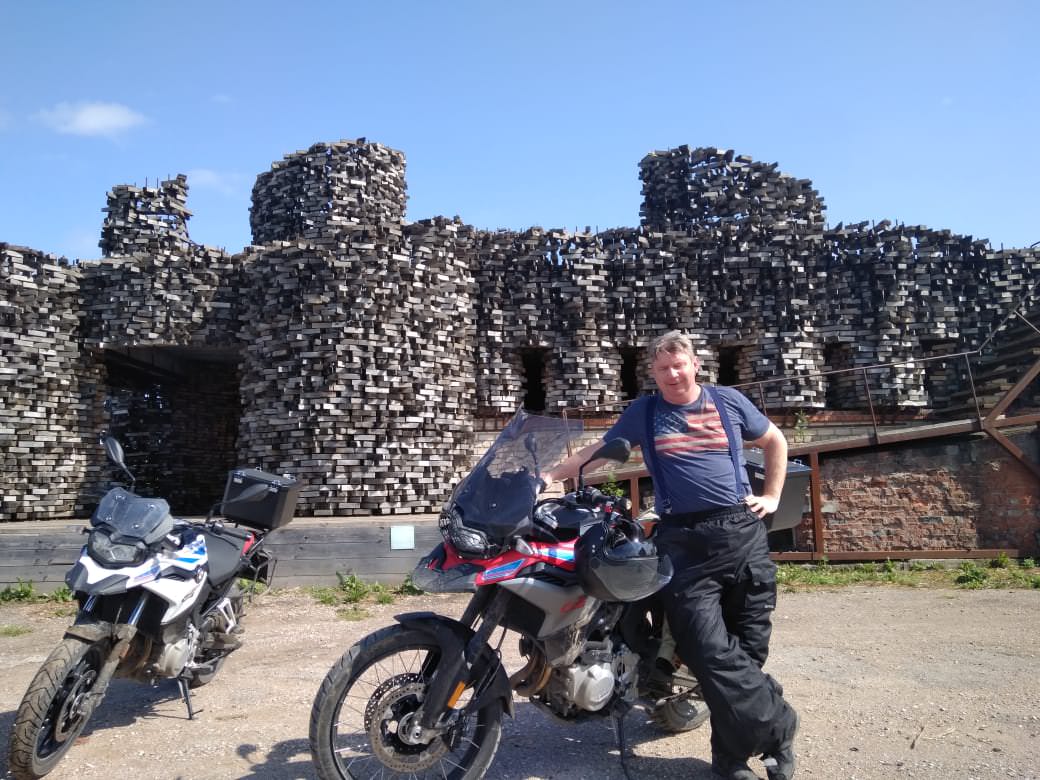 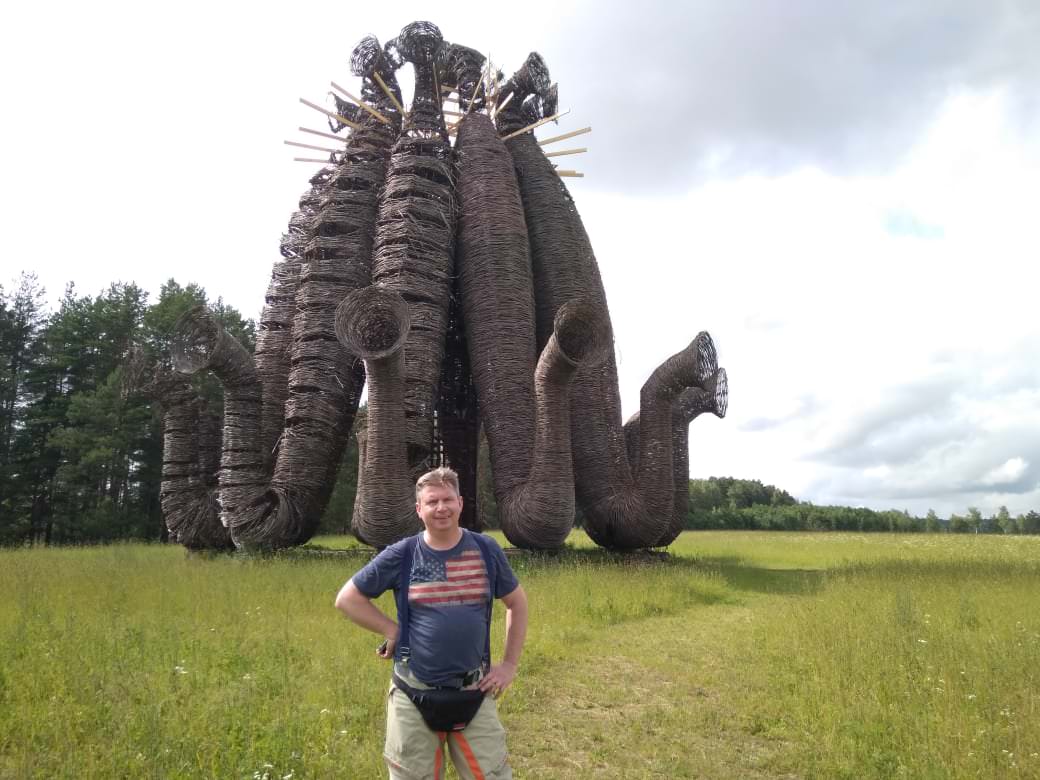 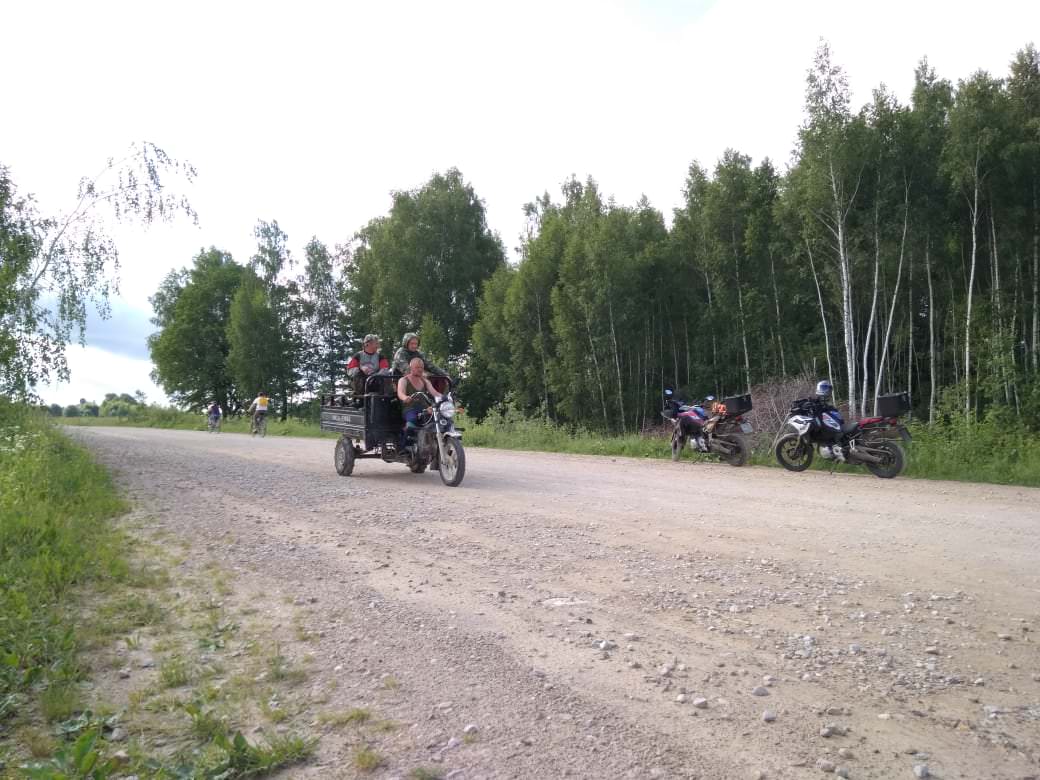 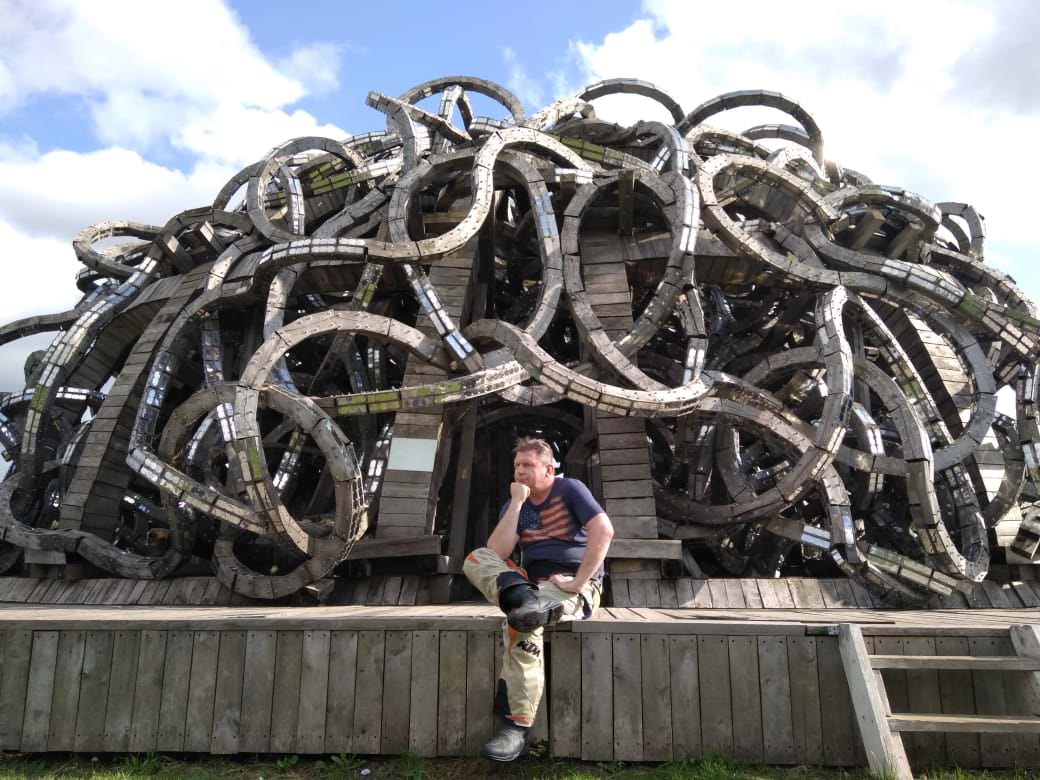 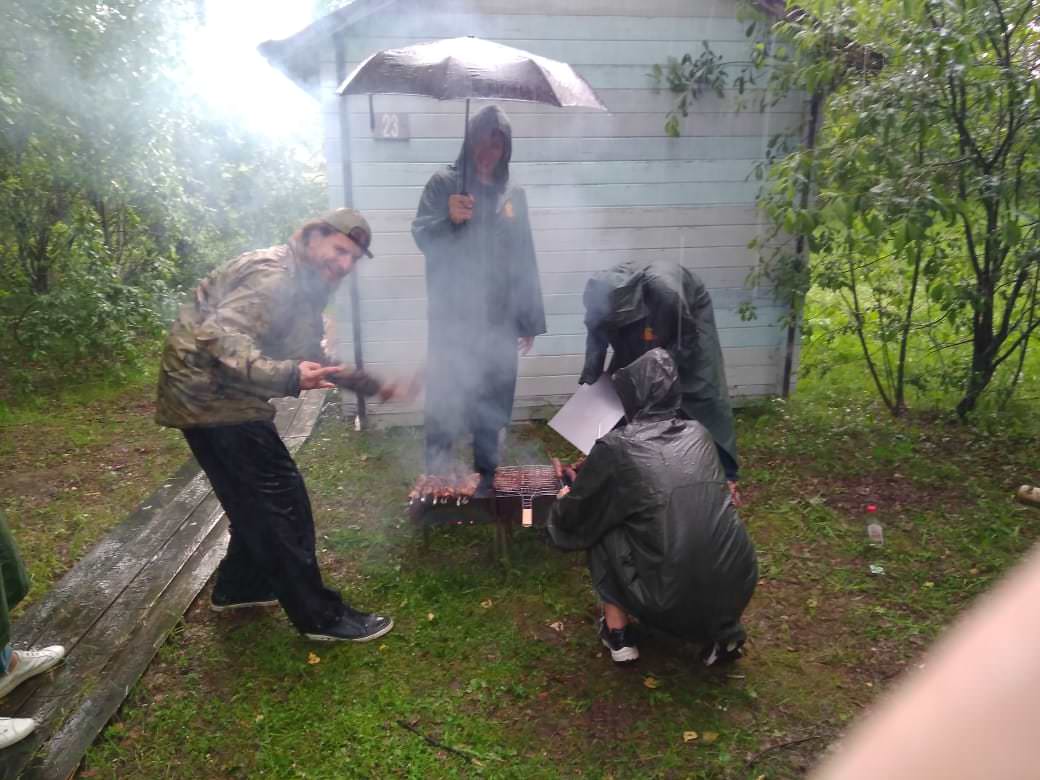