Report about Sochi-Elbrus Tour in September 2018

In the first half of the day we met part of the group in the airport and arranged transfer for them to the hotel. After signing documents we did a small ride to Rosa Plato (20 km around nearest mountains) to get used to the motorcycles. At the dinner in the "Trikoni" restaurant we held a briefing on the upcoming tour. In the evening, after dinner, we were joined by the second part of the group, we stopped at Dynasty and had a glass of beer, where we also signed documents and discussed the upcoming trip.

At 8.00 we had breakfast at the hotel and half an hour later we went to Tuapse. We were a bit unlucky with the weather on the road - it was drizzling light rain, because of which the road became slippery and movement along the serpentine road required special care. Despite all the precautions, in one of the turns Stanislava did not hold the bike, fell down and slipped a couple of meters on its side. Luckily no injuries and no damage to the motorcycle.

The incident sobered the group and almost to Tuapse everyone drove slowly and carefully. On the Shahumyan Pass, one motorcycle struck the rear wheel. We put the harness, pumped up the wheel. In the future, the harness normally kept the pressure, and we decided not to waste time on tire fitting to install the patch, the more suitable was the replacement of rear rubber on this motorcycle.

In Apsheronsk, we ate tasty meals at the Agat Cafe and continued moving towards the Dakhovskaya stanitsa. Because of the fall and the puncture, we had not enough time to visit the Great Azishkh cave. We stopped at two viewing platforms, where a picturesque view of the Lago-Naki plateau opened and returned to the Dakhovskaya Sloboda hotel. At the dinner we talked about the day, had some local beer, tasty meat and smoked a hookah. We went to sleep early in order to have time to go to Guzeripl in the morning before breakfast.

In the morning, a couple of people decided to sleep, the rest of the group woke up, and we went to the village of Guzeripl. On the way, we made several stops in the beautiful places of the granite canyon and the Belaya River. An interesting serpentine road left from the village to the right — an excellent road in quality and opening views, especially in the rays of the morning sun. In total, it turns out about 80 km round-trip. Everyone was very impressed by the morning trip and we were back to the hotel for breakfast in a great mood.

After breakfast, we drove towards Arkhyz via Maikop, Psebay and stanitsa Zelenchukskaya. The weather improved - the sun was shining all day and it was warm. The new road to Arkhyz is perfect in quality, and the opening views are pleasing to the eye. Impressions also added a flock of sheep coming down from the mountains.

In the restaurant "Springboard 1650" we were fed deliciously and told that they would close soon, because will be off season. They asked to call in advance and warn about the arrival, they will try to go to work under our group even in the offseason.

After Arkhyz, we went to Dombay through Karachaevsk. The road continued to delight with its quality and views. We settled in the hotel and went to dinner at the restaurant "At Zuli". Perfect dinner made the day. Everyone was satisfied with the day.

Rest day at Dombay. Everyone slept well and we met at breakfast at 9.00. After breakfast, a little ride with backcountry roads to mountain lake Tumanlykel, where the Rostov guys decided to swim, and we supported them. The water was about 15 degrees, very refreshing and added vivid impressions of the trip. The weather was great and on the way,  we took a lot of great photos and videos. After the trip, considering the wishes of the group and the wonderful weather, we decided to go up the mountain with the cabin.

At 1950 meters we had lunch in a cafe with a great view of the mountains and then went even higher. The views were stunning - after all, the Dombay offshoot of the Caucasus range is striking in its scale. Added to the piggy bank a series of beautiful photos. It is important to note that the ascent to 3000 m is also an acclimatization preparation for a higher ascent to Elbrus.

After climbing to the peak, we returned to the hotel and went to the bathhouse, where we had a great steam bath and many talks. True, not all went to the bath, part of the group decided to rest until dinner. After the bath, we went to dinner at the Crystal restaurant.

At night the weather turned bad and it started to rain. After breakfast, having warmed and put on raincoats, we moved towards the Gumbashi pass. At the top of the pass there was heavy fog, visibility 5-7 meters, temperature +2 degrees and light drizzle on the verge of snow. Despite the harsh conditions, everyone was doing well.

After descending from the pass, it became noticeably warmer, and the weather began to improve. For lunch we stopped in Yessentuki. After we drove towards Elbrus, having made several stops for photographs in beautiful places.

After a cold and dank day on arrival at the hotel, we drank the legendary moonshine, which turned out to be very useful, and then everyone went to warm themselves in the hammam. In the evening, we went to dinner at the cafe "Freeride", where, continuing to warm ourselves with strong drinks, we sat in a very soulful mood.

In the morning we had breakfast at the hotel and gathered to climb Elbrus. The weather forecast did not bode well - everything had to be overcast. But everything turned out well, and we got to that very hour window when incredible views opened around.

Getting to the 3850 meters we all together decided to climb further on the large snowmobile. When we reached 4700 meters strong wind was blowing and the temperature dropped to minus 8-10, plus mountain sickness quickly progressed. But all the tests were not in vain, and we had stunning views.

Unfortunately, the photos do not convey the full picture, but I think these moments will be remembered by all the participants of the tour for a long time. Because of the high attitude we spent not too much time at the peak and in relatively short time decided to go down. Back in the hotel most of the group wanted to have rest, some went for souvenirs.

After dinner, we went to bed early - everyone was exhausted from mountain sickness, and the next day nearly 600 km was to be covered.

Along the way we made plenty of nice photo-stops and under a very picturesque sunset came to the hotel. In the evening, we had dinner at a restaurant at the hotel, and with a part of the group went for a walk around the center of Goryachiy Klyuch.

After breakfast at the hotel we moved towards Sochi. The first part of the serpentine was poorly loaded with traffic, and we quickly got to Loo, where we stopped for a light snack and coffee.

While making coffee, part of the group decided to go swim in the sea. After coffee and swimming, we decided to ride to Krasnaya Polyana without stops to do early dinner. When arrived to the hotel few hours later everyone congratulated each other on the successful completion of the tour. At the farewell dinner in the restaurant “Dynasty” there were many toasts with gratitude for the tour - everyone was overwhelmed with emotions and impressions.

Another Elbrus tour confirms that Sochi-Elbrus is one of Rusmototravel’s best tours - excellent roads, which even inexperienced travelers can handle, gorgeous mountain views throughout the entire route, good hotels and restaurants, hospitality of local residents, the ability to climb high in the mountains using cabins and snowmobiles. Emotions and impressions of the tour overwhelm all participants, without exception, and remind of themselves for a long time. 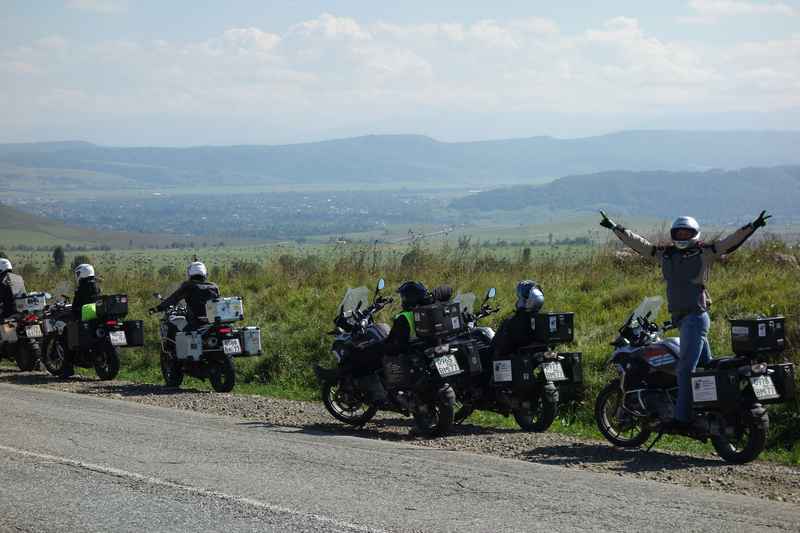 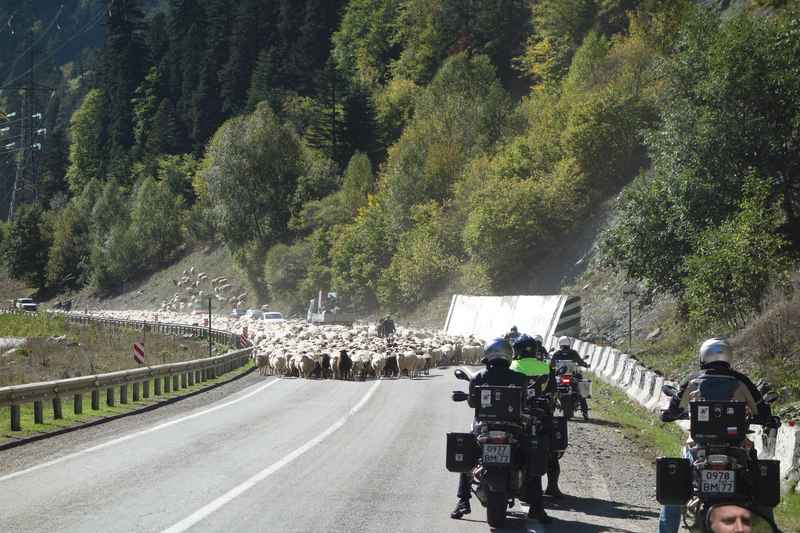 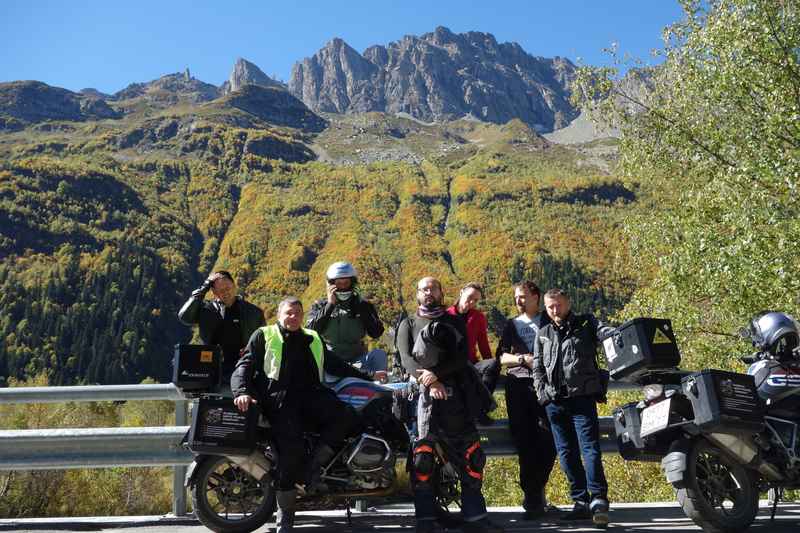 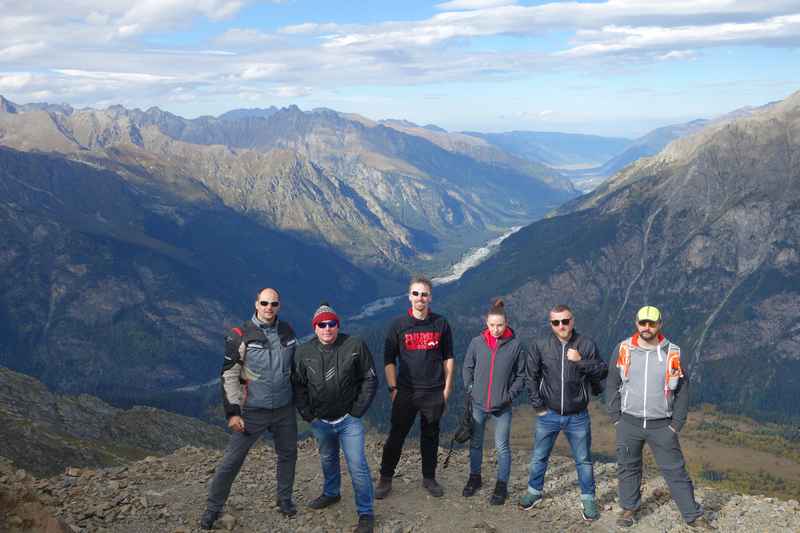 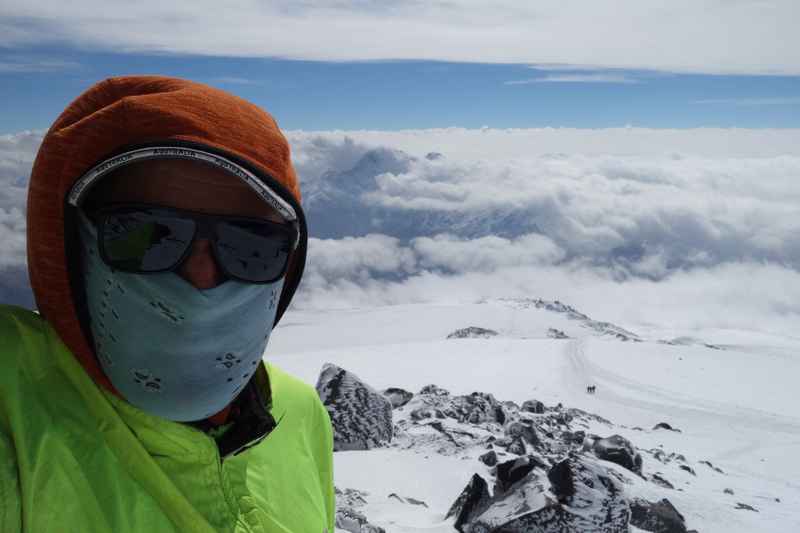 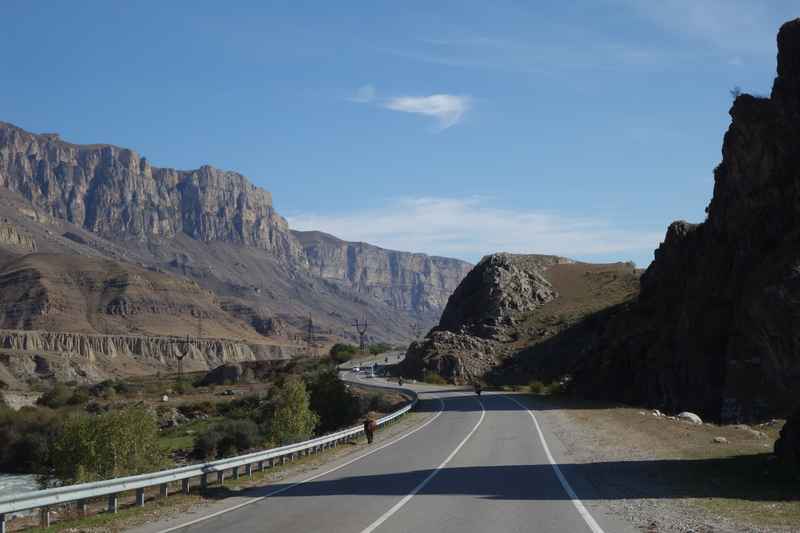 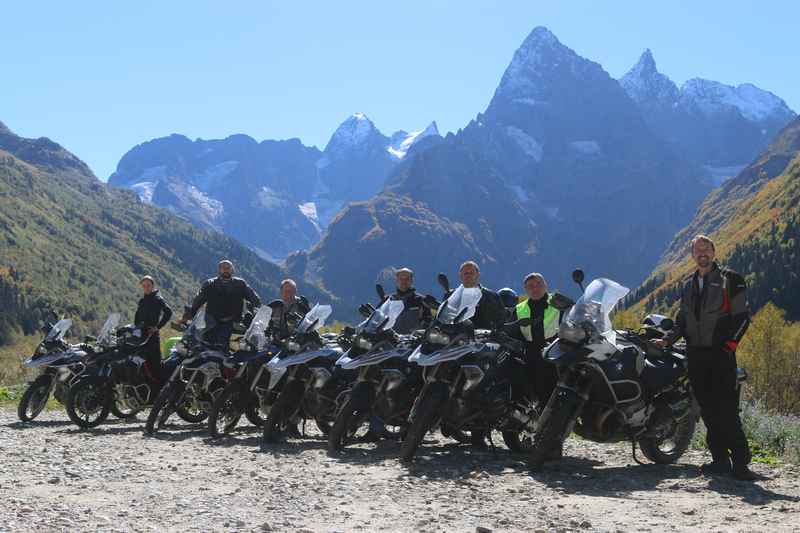 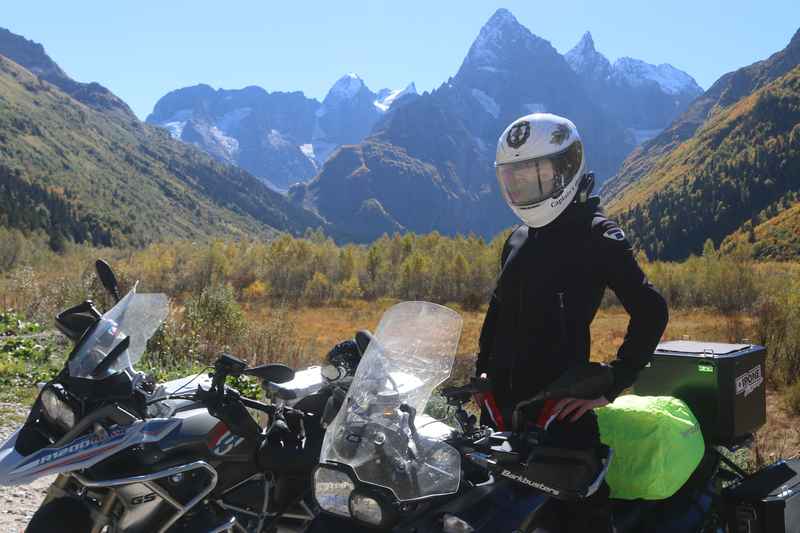 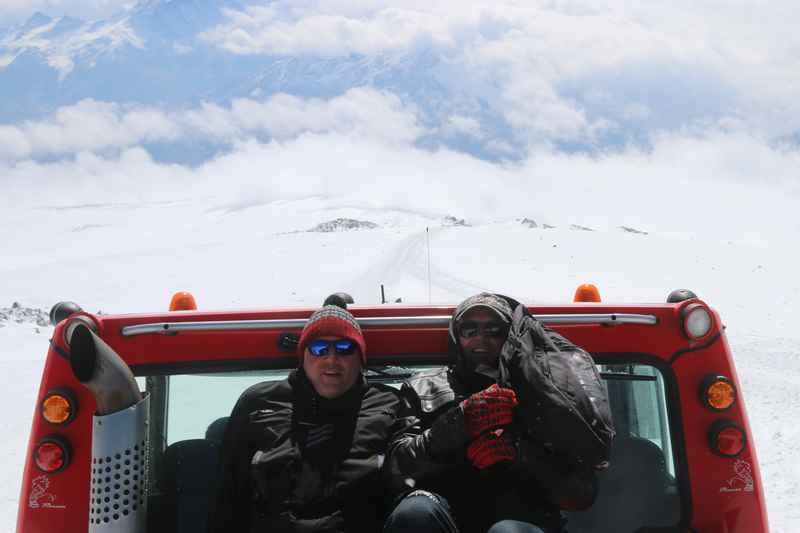 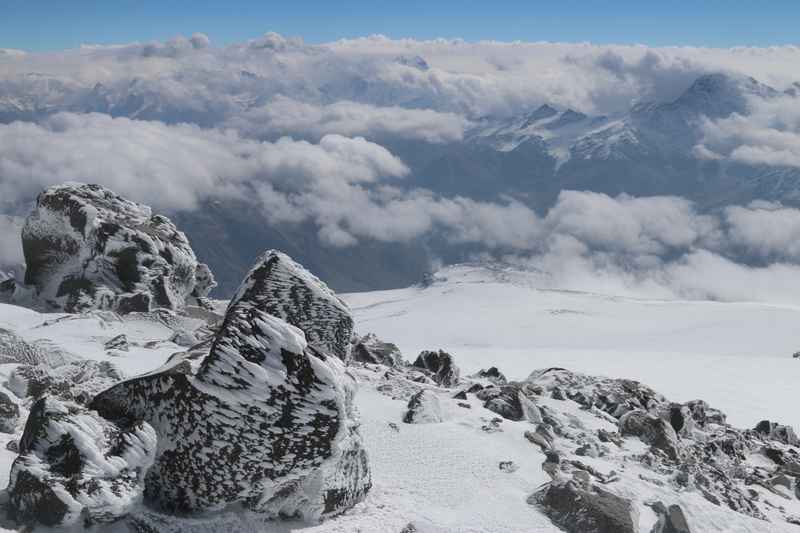 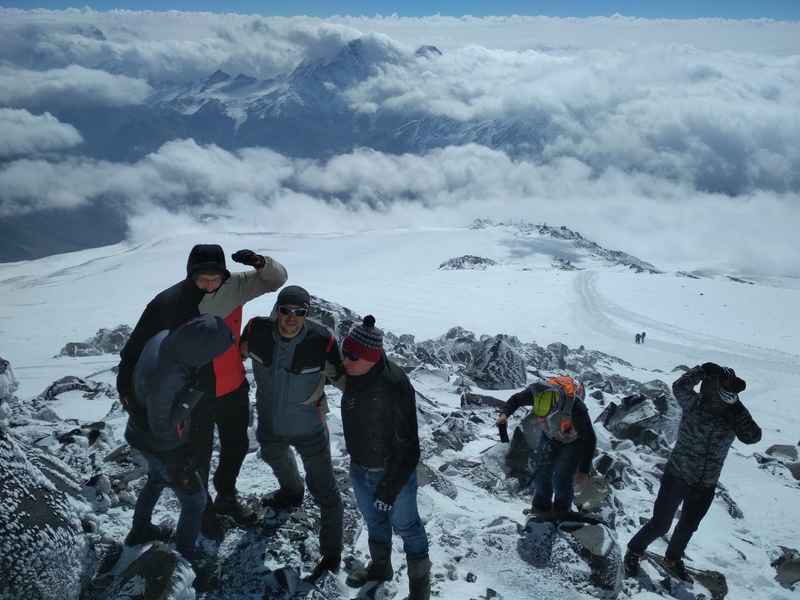 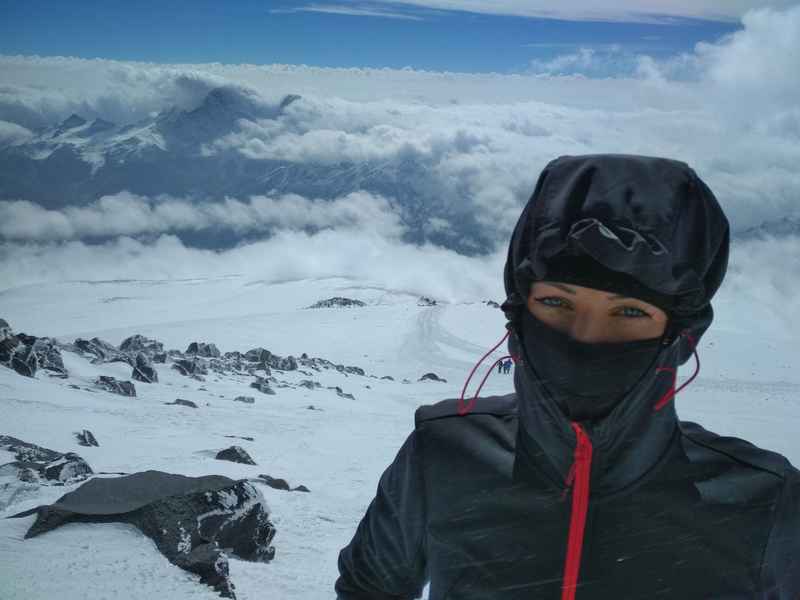 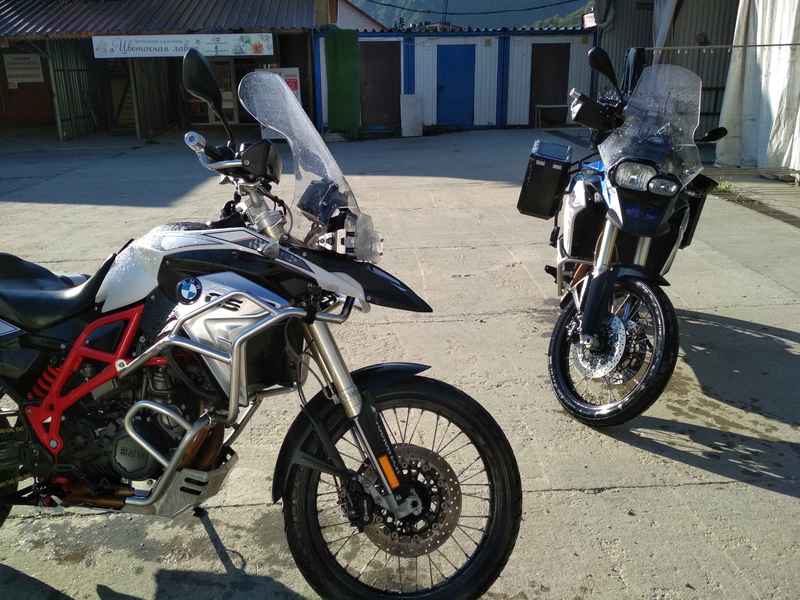 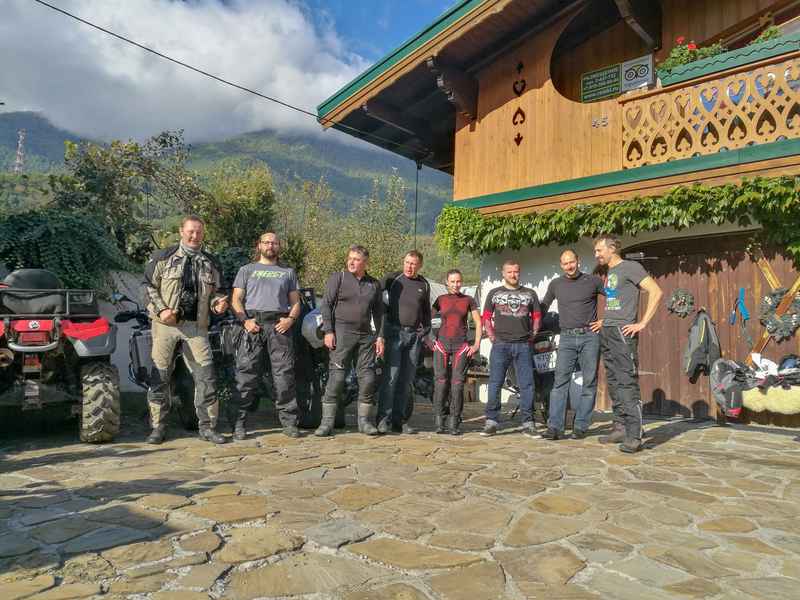