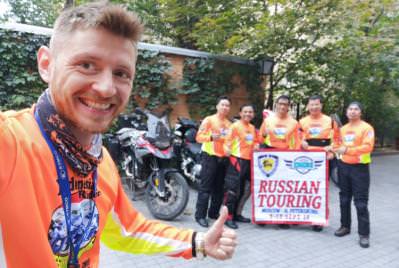 Our last Moscow-St. Petersburg custom tour in 2019 season started on the 5th of August. Five good old friends from Indonesia have arrived at Moscow one day earlier. That was quite enough for them to get the bikes, pack all the stuff and of course to meet their tour guide. Anton was the one who was supposed to be the only guide for this group. Originally from St. Petersburg, he was the best choice for our Indonesian lads.

So, after a morning briefing all the six started the engines and left Moscow to start the adventure. There was one GS1200, 4 F800 and a brand new F750 in the group. A first riding day was rather simple – slightly more than 200 km. After leaving the capital of the country (which is always a bit tricky because of the traffic) the group headed North to Tver. There were two ferry crossing on their way. And if the first one was rather common – a 100 m. pontoon across the Moscow canal, the second one was much more exciting. That happened after lunch in Konakovo, a small village on the bank of Russia’s greatest river Volga.

All the group loaded onto a huge 30 meters long ferry and in 25 meters was on the opposite bank of the river. Here was the place where the first real adventures started. As all the riders had some decent off-road riding skills, Anton suggested to take a 30 km. long dirt road. Sometimes it is hard to believe but only 100 km. away from Moscow you can find a perfect gravel/sandy road that brings you to a remote area where people live without any central heating or gas facilities. Of course, that kind of a village was right on the way.

The group made a short stop there just to have a look how locals were doing there and what they were harvesting. After getting the first impressions of rural life in Russia our boys finished the day in Tver, a beautiful and cozy little town which people call the 2nd St. Petersburg for its charming architecture.

Second day of the trip was promising a bit longer riding distance – 350 km. Destination point was Velikiy Novgorod (or simple Novgorod as we call it in Russia). To get there the group used two of the main roads in Russia – M10 and M11. Yes, we are not the very big fans of choosing the motorways as the main roads in our tours but in that particular situation that helped a lot to avoid some massive traffic jams caused by the heavy trucks.

Moreover, the M11 highways is one of the newest toll-roads we have in Russia which means – no traffic. In two hours of riding guys reached Valday Monastery – a beautiful 17th century built sacred place which attracts pilgrims from all over Russia. After spending some time following Anton's mini excursion on the territory of the monastery the group proceeded for a lunch break which took place in Valday Eco Club restaurant – a lovely place in the forest of Valday National reserve.

Another stop was in Krestsy village – a no chance skipping place on the M10 highway. There is nothing special in the village in general but one place there is worth mentioning. We call it a «samovar» place – a square where local ladies serve tea and coffee cooked in Russian traditional kettles (they are called samovars). That was a great experience for the guys as it is something absolutely unique and not so easy to find nowadays.

In the evening the group reached Novgorod. That is a truly special place – one of the oldest towns in entire Russia (founded in the 9th century), a Hansa-town, a first capital of Ancient Rus (predecessor of today's Russia) which amazes its visitors with glossy domes of old churches, glorious history, medieval Kremlin and very calm and peaceful life of locals.

If there was more time that would be a brilliant idea to spend a whole day in Novgorod to study all of its beauty, but the group hit the road. And it was a pleasant ride as guys headed to St. Petersburg – a must visit place in Russia.

Less than 300 km. were covered pretty fast, riding along the farming areas of Luga, where the group was witnessing the Autumn harvesting process. Right before having lunch guys visited Rozhdestvenno (try to pronounce it J) village where they had a quick look at a former estate of Russian writer Vladimir Nabokov. Nice place to have a break, take some pictures and listen to another Anton’s story about the life of the Russian nobility in the XIX –XX centuries. In the early evening the group finally reached St. Petersburg and after a short walk in the downtown of the city had a great dinner in one of the traditional Russian restaurants in the city.

No matter how much you love riding the bike, the rest day is always a good idea, especially in a city like St. Petersburg. A walking tour in the historical center of Russia’s most beautiful city visiting main sights including the Hermitage museum, a boat trip to Peterhof, a former official Royal residence of the past and nowadays an enormous 260 acres park with more 150 fountains, and of course the night river and canal cruise – this was a minimal program for our group not to feel bored without the bikes. And it was beyond the description!

After having a proper rest in St. Petersburg our group headed to the direction of the western border of Russia. In 330 km they were about to reach Pskov. Leaving the city didn’t cause much issues and pretty soon a first stop was made.

It was an old fortress Koporie – a fantastic example of medieval fortification which can only be found in this part of the country. Abandoned but preserved Koporie fortress now is a monument that reminds us about the glorious past of these lands in the very beginning of Russian state.

After a short break guys continued their journey and headed more to the West. Passing Kingisepp and Slantsy towns, riding through endless fields and forests, enjoying the fantastic road with nice curves they found themselves in a lovely recreation area right in the shore of a huge Chudskoe lake. A nice place to stop for lunch and listen to Anton’s stories about the famous “ice battle” that happened here between Russian warriors and German knights in the middle of the 13th century.

It took less than 1,5 hours to reach Pskov and as soon as it was still bright outside the group enjoyed a bit of riding through the city center, making short photo stops. Pskov is also in the list of the oldest towns in Russia and is considered to be the most western city as there are 50 km to the Estonian border from here. Places of interest are everywhere. A totally renovated embankment of Velikaya river brings you to Krom (the Kremlin) – the heart of the city. Inside you can enjoy visiting the Trinity cathedral which is the symbol of the city or have a look at the preserved results of excavation works.

Our group did both and definitely enjoyed studying a reach history of this place. A nice evening walk down the cozy tiny streets and it was about the right time to have dinner. Right time and right place as the restaurant was just perfect – it offers the variety of pskovian cuisine which is almost impossible to try somewhere else.

The next day the group covered another 30 km and reached the most western point of the tour – famous Pskovo-Pecherskiy monastery. To make it simple this monastery was founded in the middle of 15th century when the first church was built here. And it was not a simple church as it was under the ground, in the cave. Till now there are lots of underground tunnels which form the mysterious catacombs that attract curious pilgrims not only from Russia.

Seeing enough of it the group continued the journey making a U-turn in direction of Moscow. Pskov area is just a perfect place for driving the bike. First of all, the roads are just perfect, second, it is not very much populated outside town and cities so there is almost no traffic on the roads. Together with lovely villages and nice scenery that made our group enjoy this riding day. In the middle of the day guys decided to enjoy some more of the non-asphalt roads so Anton changed the route and our group covered another 30-40 km. of gravel fun.

They were lucky as the day before the rain killed all the dust here and driving was safe and pleasant especially with the perfect bikes they had for this. During the lunch break in Bezhanitsy village another interesting thing happened. Two old gentlemen saw the bikes parked outside the restaurant and came inside to say hello. It turned out that they were good old friends which started riding bike in their youth. With old Panonia and CZ the were travelling across all the European part of the former territories of Soviet Union, from Estonia to Ural Mountains and from northern lands to Crimea peninsula. It was a great acquaintance – motorcycle travelers are everywhere =)

In the evening our group reached the destination point for that day – Derbovezh lake. A hotel situated on its bank hosted the guys and a lovely dinner was served in the local restaurant.

The last riding day of the journey was a special one as the group was getting ready to finally reach the capital of the country and take a so awaited photo in the heart of it – at the Red Square. The distance was not that long so our group reached Moscow at about 4pm Taking pictures at the Red Square is always a challenge as firstly you should get there riding through the busy traffic and secondly you should find a proper place without crowds of people behind you. Coping with both with a 100% result all the members of the tour safely reached the hotel. With smiles on their faces they parked their bikes headed to the restaurant for a “gala” dinner.

If riding was over, the journey wasn’t at all. A Moscow walking tour was waiting for the guys. They spent a fantastic day with local guide visiting Moscow Kremlin with all of its sights, seeing the famous Bolshoy Theatre – cradle of Russian ballet art and of course taking a ride in Moscow metro – one of the most beautiful in the world.

That was a perfect cherry on the pie of this tour which was full of great events and emotions. We hope that they enjoyed it and returned back home with only the good memories! 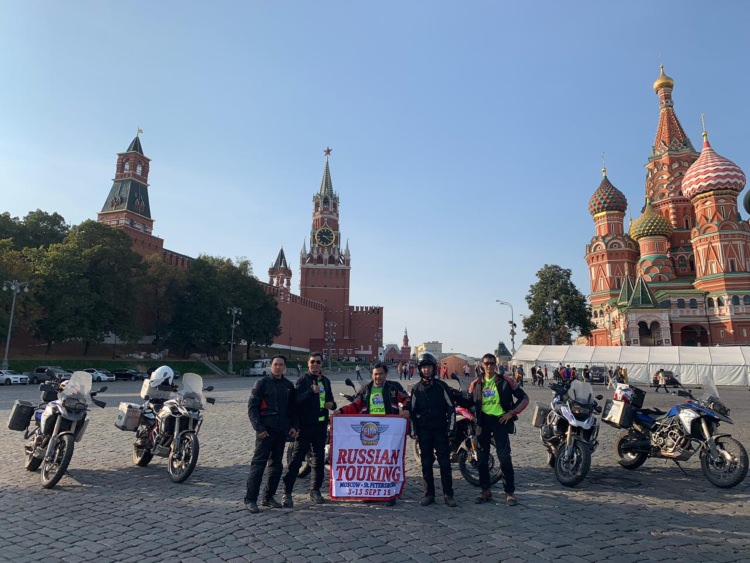 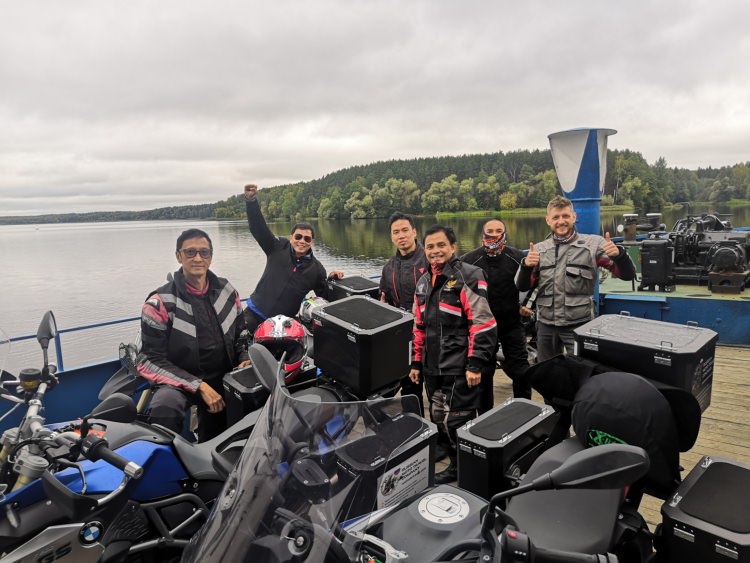 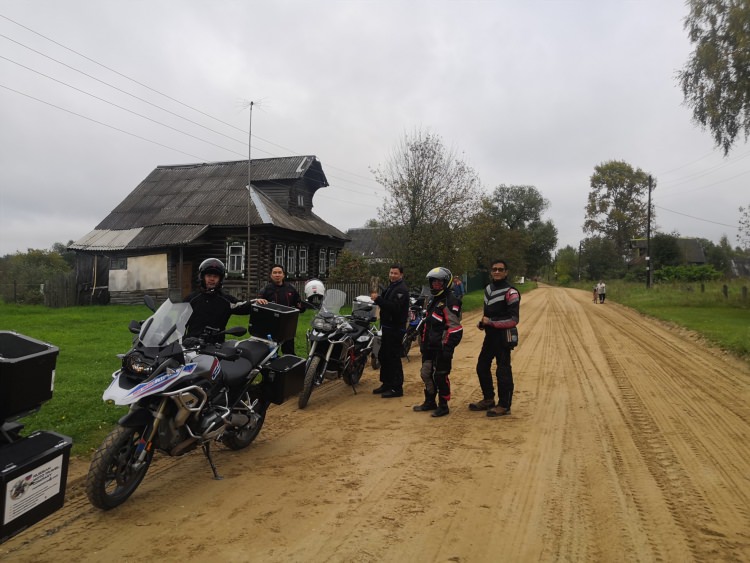 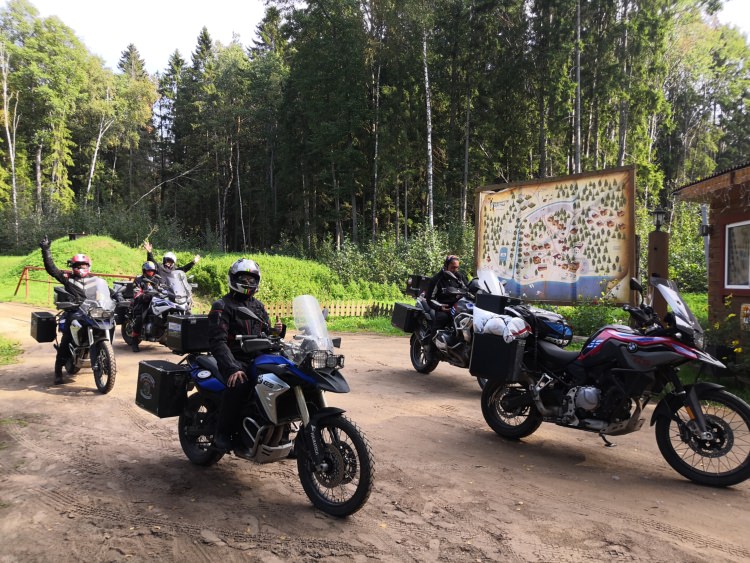 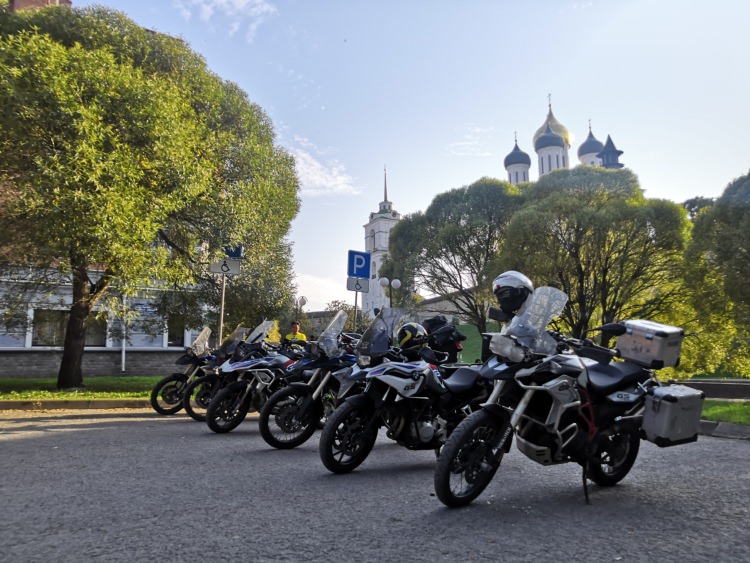 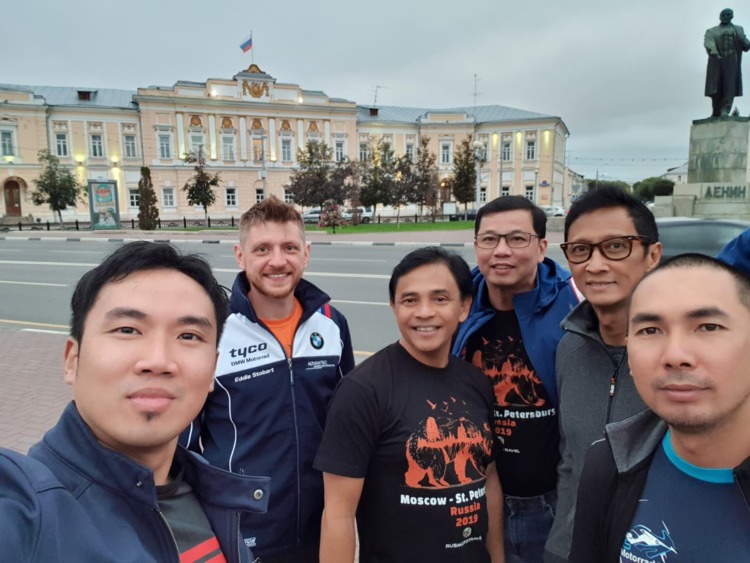 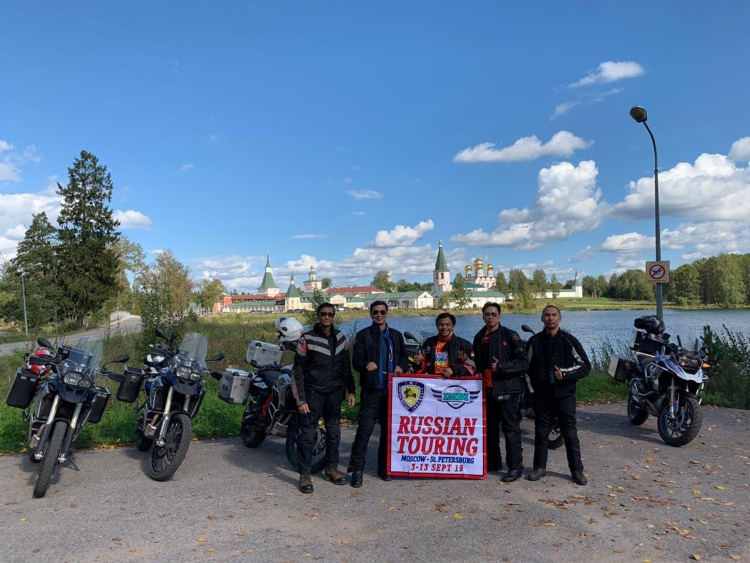 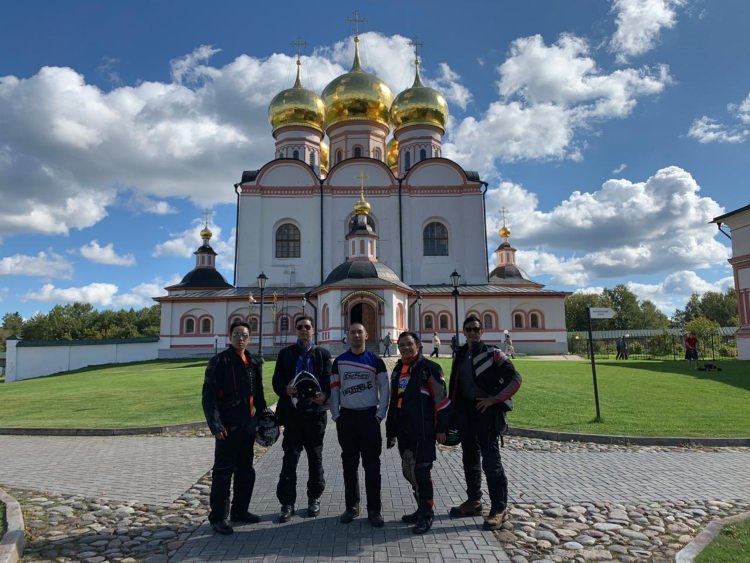 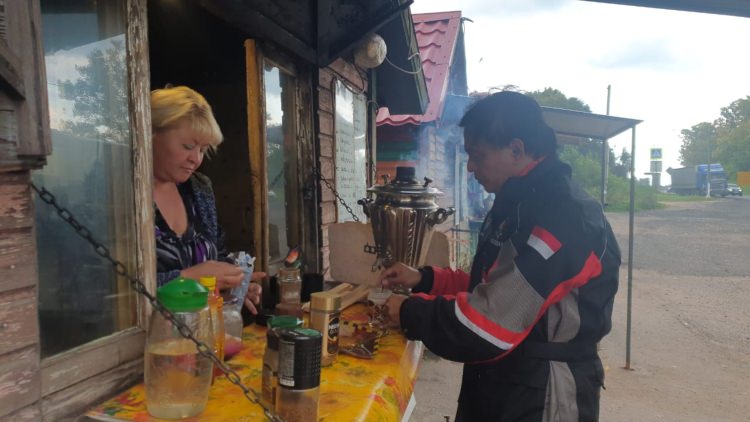 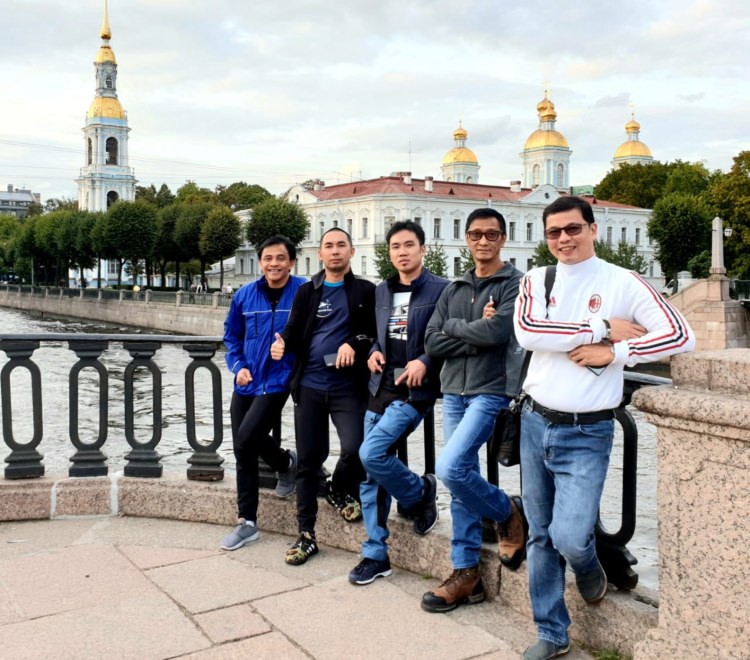 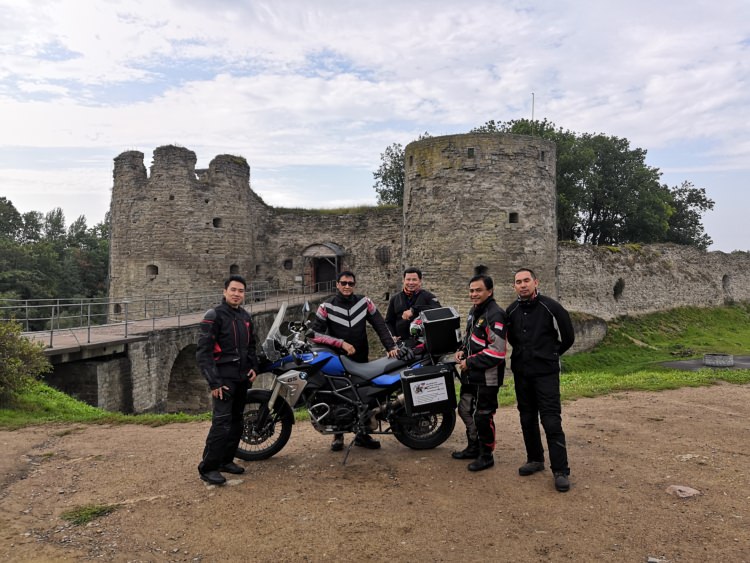 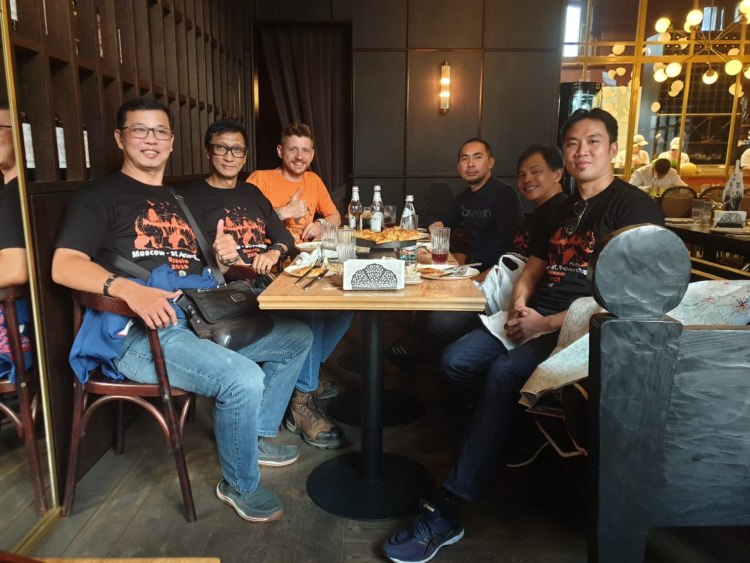 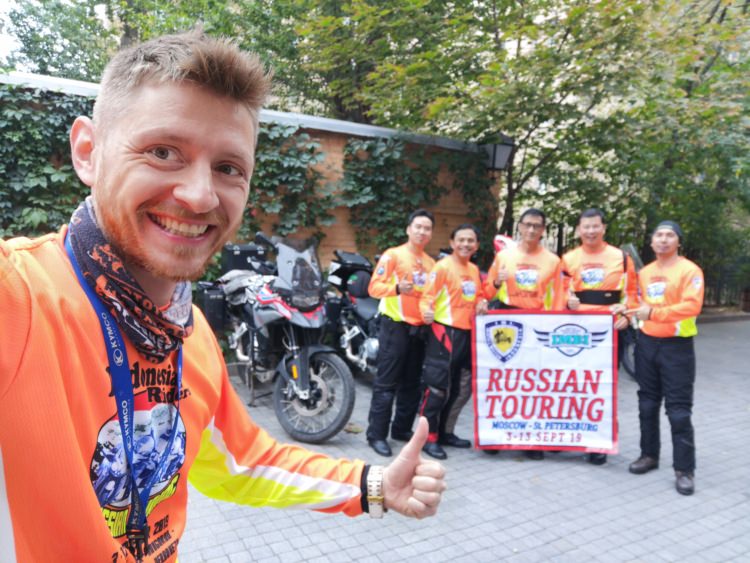