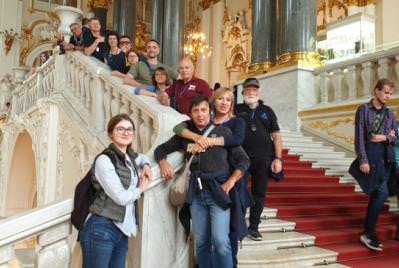 In 2016 we organized our first joint tour with the Italian company Motoexplora. It was a short week trip with a group of Italians along the Road of Tsars - from St. Petersburg to Moscow. Our guests liked it so much that almost every year we organize it for our Italian friends. Below we will tell you how this tour went this year.

Maria, our guide on this tour, shared her impressions of the tour.

There are less than 400 km of good roads between Tallinn and St. Petersburg, and the day promised to be simple and short-lived. Indeed, 200 km from Tallinn to the border city of Narva passed unnoticed: a wide and smooth road looped between copses and well-groomed Estonian fields. Sometimes, somewhere in the distance, the waves of the Gulf of Finland shone in the sun. We flew this segment of the journey in a couple of hours, making a stop to drink coffee in a good mood.

The main and only difficulty was the border crossing - first from the Estonian side, then from the Russian side. This is not the most pleasant thing for a large group of foreigners: because of the abundance of bureaucratic procedures and the slowness of border officers. We spent about six hours at the border.

I am glad that in 2020 custom promised to ease border crossing process and introduce electronic registration of declaration forms for travelers. If so, then next year passing the border will be much faster.

Having successfully crossed the border, we celebrated this event in St. Petersburg in a restaurant of Russian vodka, one of the best places in the city.

Petersburg is a special place for Italians. On the one hand, it is one of the capitals of a huge country. On the other hand, Italians feel at home in St. Petersburg and its environs. The city was built in many respects by the forces of their compatriots: embankments, Senate Square, the Winter Palace, Peterhof palaces. For our Italian guests, this is both a matter of pride and an object of curiosity: how Russia understood European culture and interpreted in its own way.

The Hermitage, being the main museum in Russia, was conceived primarily as a collection of foreign art. Several rooms of the Hermitage are dedicated to Italian Renaissance art. Pictures of Botticelli, da Vinci, Perugino, of course, are in the Uffizi Gallery. But since people from the most remote corners of Italy have gathered in our company, why not take a look at them here?

The idea to go on motorcycles to Palace Square and the arrow of Vasilyevsky Island turned out to be a great one. Stunning views of St. Petersburg open from there, and these are the best photos of our tour.

Valdai is an area in the North-West of Russia, famous for hills covered with dense forests and blue lakes. When we travel with our travelers from St. Petersburg to Moscow, we try to definitely drop in at the Valdai eco-club. Steam in a bathhouse, drink tea from a samovar, sleep in silence, interrupted only by rare cries of nocturnal birds.

On the way to Valdai, we managed to call in Veliky Novgorod - have lunch and take a little walk around the Novgorod Kremlin. After the magnificent gilded Petersburg, after the palaces of Rastrelli and marble lions, the contrast with the ancient city of the Golden Ring of Russia was especially striking.

It was all the more interesting to tell Italian tourists that stone architecture, mass literacy, extensive trade relations with Europe and distant military campaigns along Volkhov and beyond were not alien to Russian cities in the Middle Ages.

Moscow, a huge and rich city, always impresses those who come for the first time. The impression on our group, gathered from small Italian cities, she made amazing.

For two days in Moscow, we managed to get around the main attractions of the center: the Cathedral of Christ the Savior, the Kremlin, Red Square, Pokrovsky Cathedral. They found out where in 1987 the German pilot Matthias Rust landed, who wanted to build a bridge between the Western world and the new perestroika Russia. How did Italian socialists end up in the USSR and what came of it. And why Moscow is so motley and what influence did Italian architecture have on its appearance.

Finally, taking advantage of the excellent weather and free time, we went to the Vorobyovy Gory to appreciate the panoramic view of the capital and take some beautiful photos on motorbikes with a view of Moscow and the university.

The last day of our tour - we are going from Moscow, with a stop for photography on Red Square, west, towards the border with Latvia, to guide our travelers. 400 km along an excellent two-lane road, through forests, through the Savvino-Storozhevsky monastery, through the places of military glory of the Soviet troops.

Here we summed up the trip and said goodbye until the next trip. This time, our Italian group managed to catch a glimpse on the tangent of meeting Russia.

And Russia is big (very big!), Very different and interesting. It will be why come back next year.