Sakhalin is the largest island in Russia, washed by the Okhotsk and the Japan Seas. In 1805, the Russian ship "Nadezhda" under the command of Kruzenshtern explored most of the coast of Sakhalin, but it was not possible to bypass Sakhalin around...

Sakhalin is the largest island in Russia, washed by the Okhotsk and the Japan Seas. In 1805, the Russian ship "Nadezhda" under the command of Kruzenshtern explored most of the coast of Sakhalin, but it was not possible to bypass Sakhalin around and the question of whether Sakhalin is an island, or a peninsula remained without an answer

In 1808, Japanese expeditions proved that Sakhalin is an island, but for a long time Sakhalin was designated either an island or a peninsula on various maps. Only in 1849, the expedition under the command of Nevelsky put an end to this issue, passing on the military ship Baikal between Sakhalin and the mainland. This channel was later named after Nevelskoy

This is only a small part of what you will learn when traveling Vladivostok-Sakhalin. After all, there will be Primorye, Nakhodka Khabarovsk, Vanino. Every place has its own history, but the pearl of this tour is, of course, Sakhalin

The tour starts in Vladivostok. Finish is in Yuzhno-Sakhalinsk. Tour lasts 12 days, one way. One group goes Vladivostok-Sakhalin, the second one goes Sakhalin-Vladivostok. It is reasonable to rent our motorcycles, but you can ride your own also.

Route: where we will go 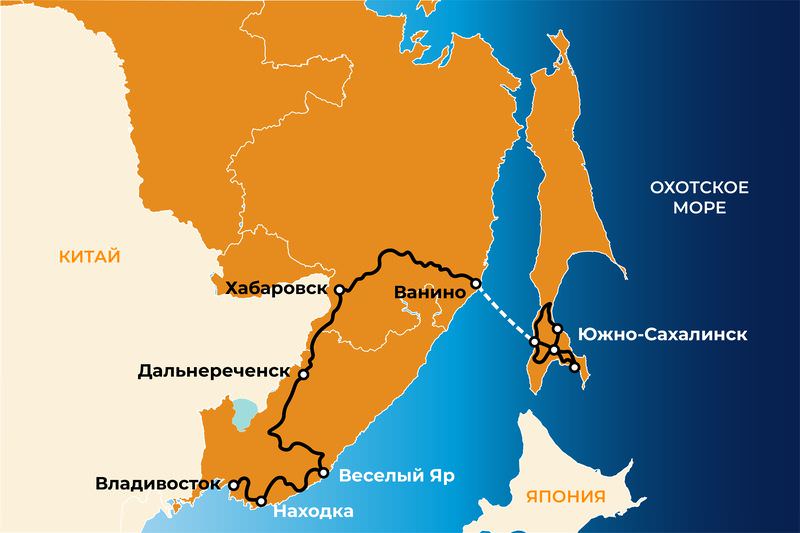 Checking into the hotel and meeting with the group. Briefing before the tour, getting the motorcycles, dinner in the city

We will start our journey through the Primorsky Territory from Russky Island, going to its southernmost part – the Cape Tobizin. Leaving the capital of Primorye, we will move along the picturesque coast of the Ussuri Bay, visiting small bays along our way. After checking into a hotel in Nakhodka, we will go on an exciting boat trip

Today we have a plan to plunge into the amazing nature of the Ussuri region. About half of the distance, we will drive along unpaved forest roads passing small settlements

One of these will be a village with the fancy name Seaman-Fisherman, located in the bay of the same name. Here on the shore, we will have a picnic near the waves of the Japan Sea. After lunch, we will go to the village of Olga, the bay of which was discovered by Russian sailors a couple of years before the discovery of the Golden Horn and Nakhodka Bay

We will finish this eventful day at the Cape Balyuzek, which is washed by the waters of the Gulf of Vladimir. Here we will check in to a cozy hotel. A delicious dinner and a bath right on the coast are waiting for us.

Having climbed the rocky shore of the Cape Balyuzek, we will say goodbye to the coast of the Japan Sea for 3 days and move towards the border with China. Our path will pass along winding roads, some of which will be unpaved

On the way, we will visit villages whose inhabitants are mainly engaged in logging and beekeeping. In the evening we will find ourselves in Dalnerechensk, a small town founded under the name Grafsky in honor of Earl Muravyov-Amursky.

Today we leave Primorye and go to Khabarovsk. This is one of the most beautiful cities in the Asian part of our country.

The wide Amur is at hand, gentle hills that add variety to the landscape, but do not make you tired when walking, an abundance of greenery. Due to the close neighborhood with China (by land it is about 25 km to reach the border), the city has many Chinese markets, restaurants, and cafes with Chinese dishes

Today there will be the biggest mileage of the whole tour. We will go to the shores of the Tatar Channel, from where we will reach Sakhalin Island by ferry

To the village of Lidoga, we will ride along the Amur in the direction of the capital of the domestic aircraft industry, Komsomolsk-on-Amur. Last 300 km of the mainland will pass along a newly renovated and incredibly beautiful road. Throughout its length there is not a single settlement, and among the locals there are only bears.

7. The Ferry to Sakhalin Island

In the morning we will board the ferry, take places in cabins, and start to explore the spaces of the Tatar Channel. Travel time is about 16-18 hours.

That’s it! We are on Sakhalin. We will start exploring the island from its western coast, going along the Tatar Channel to the North.

First, we will visit the Cape Slepikovsky, a unique natural complex, on the territory of which plants included in the Red Book grow. There is also a 27-meter lighthouse built by the Japanese in 1934.

Next, we will go to Tikhaya Bay, which is on the shore of the Okhotsk Sea, i.e., on the eastern coast of Sakhalin. Even though we will not want to leave this place, we will go south along the seacoast.

Along the way, we will get even closer to the Japanese heritage of the Sakhalin Island. We are talking about the Torii gate, which we will find in the village Seaside. We will spend the night at the recreation center on the coast of the Okhotsk Sea.

Today we will go to the southern part of Sakhalin, having previously visited the capital of the region - Yuzhno-Sakhalinsk. Then we will go on a beautiful road to the city of Nevelsk, from where we will go towards Kholmsk on unpaved road

Beautiful monuments of industrial architecture are waiting for us: the old lighthouse and the railway "devil's bridge". We will not bypass natural monuments either - we will see the Salyut waterfall and a secret reservoir.

Then we will again go to the east coast, where we will stop for the night on the shore of the picturesque lake Tunaycha

Today we will go to one of the most beautiful places in Sakhalin - the Cape Velikan. An excellent asphalt road leads there, which smoothly turns into an excellent unpaved road that goes around the shore of Mordvinov Bay

Further through the forest and hills we will reach the coast of the Okhotsk Sea, where we will go down on foot to a sandy beach with rocks in the form of arches. On the way back to Yuzhno-Sakhalinsk we will visit Lake Tunaycha - a spawning place for salmon fish

The last driving day of our trip will be very eventful. First, we will ride towards the Aniva Bay, on the shore of which one of the most modern enterprises in our country is located - the Prigorodny Production Complex, the first plant to produce liquefied natural gas

Next, we will go to Lake Busse, where we will try to participate in oyster fishing. If we have a success, it will be very tasty. By an unpaved road we will reach the small village of Novikovo, where we will leave the motorcycles and get a speedboat.

From here we will go on a 2-hour walk to the Aniva lighthouse, which is a real symbol of the Island Sakhalin. We will have lunch on the shore or right on the boat in the open sea, after which we will go back hoping to meet seals, sea lions and even killer whales. After coming back to Novikovo, we will change back to motorcycles, ride to the Turquoise Lakes and go to Yuzhno-Sakhalinsk, where we will solemnly finish our trip at dinner 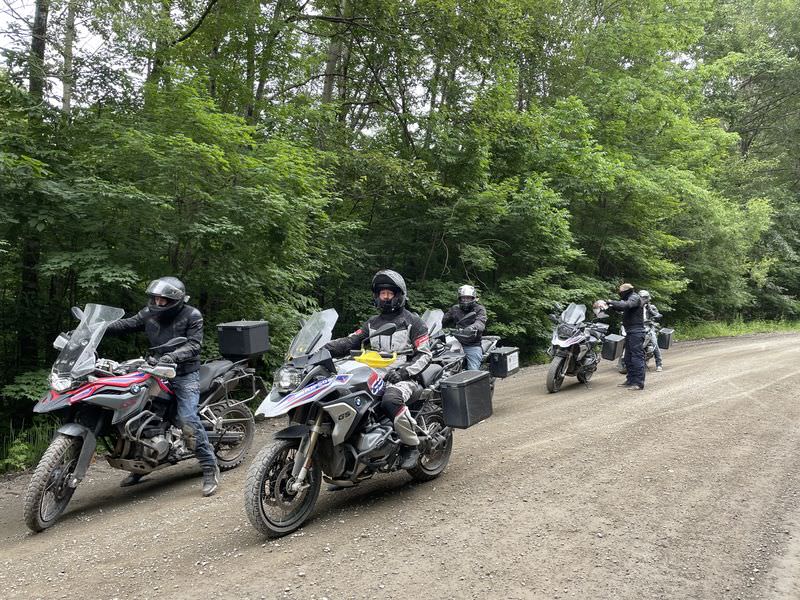 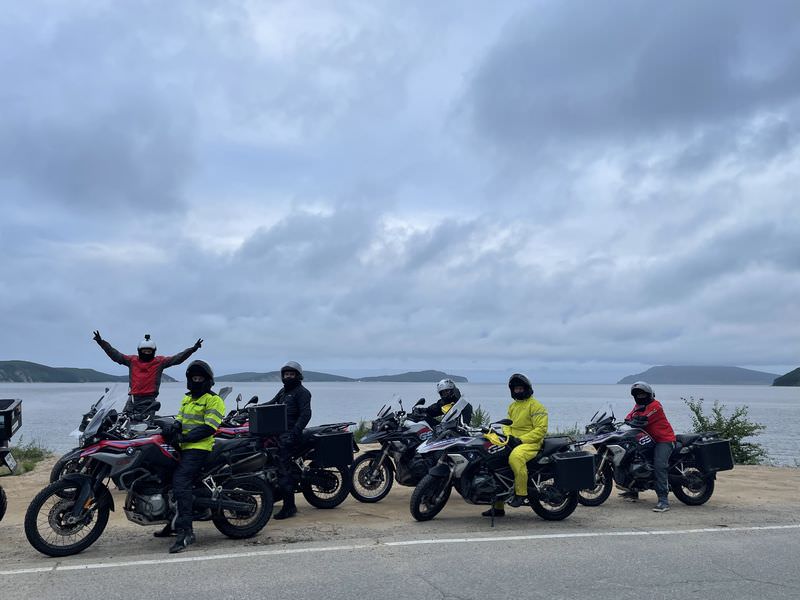 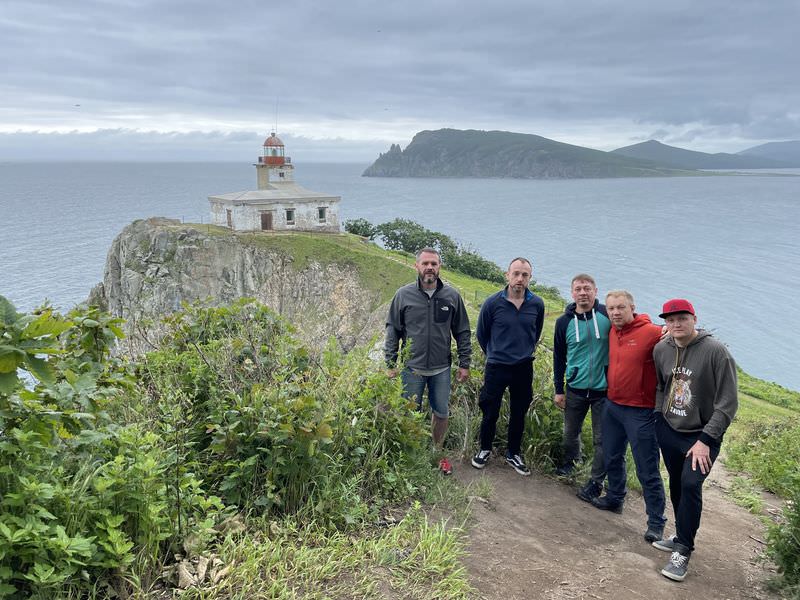 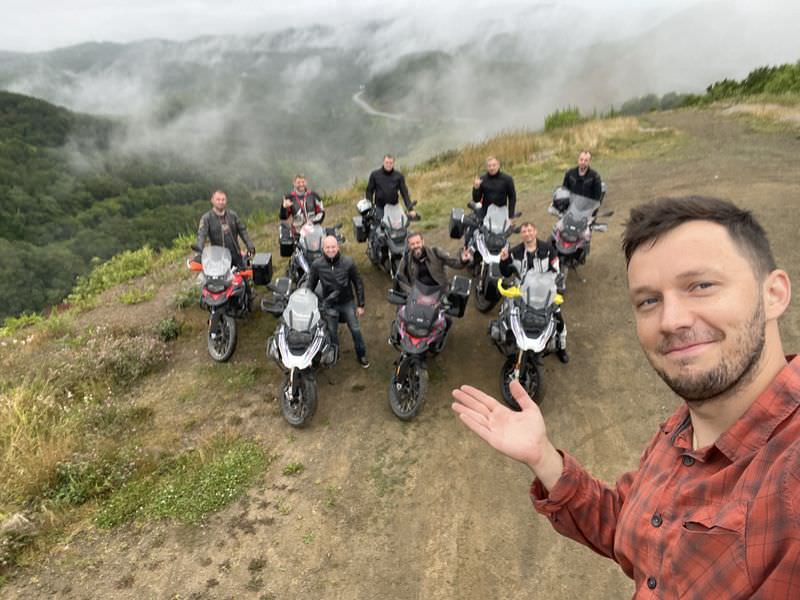 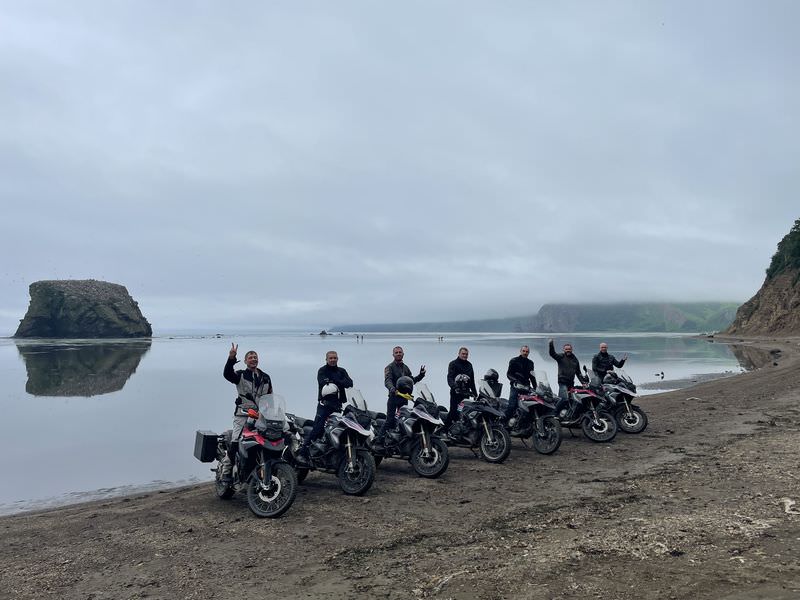 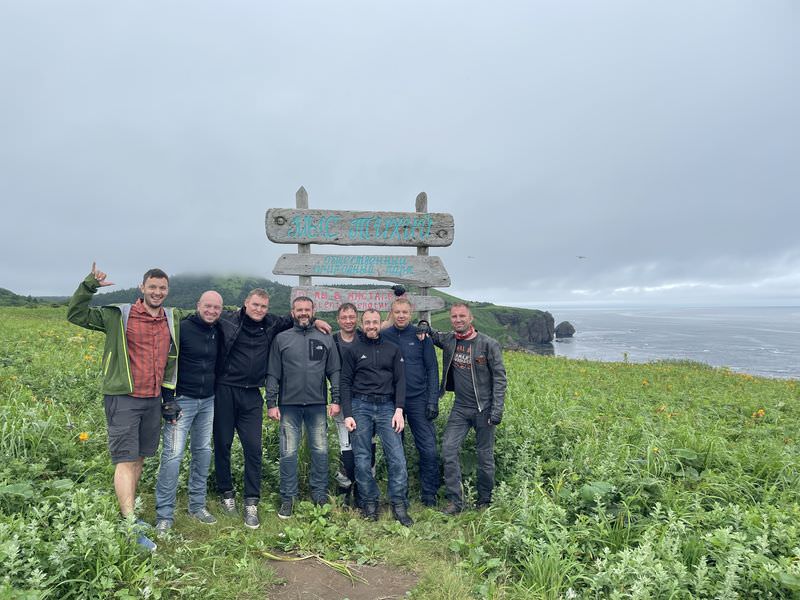 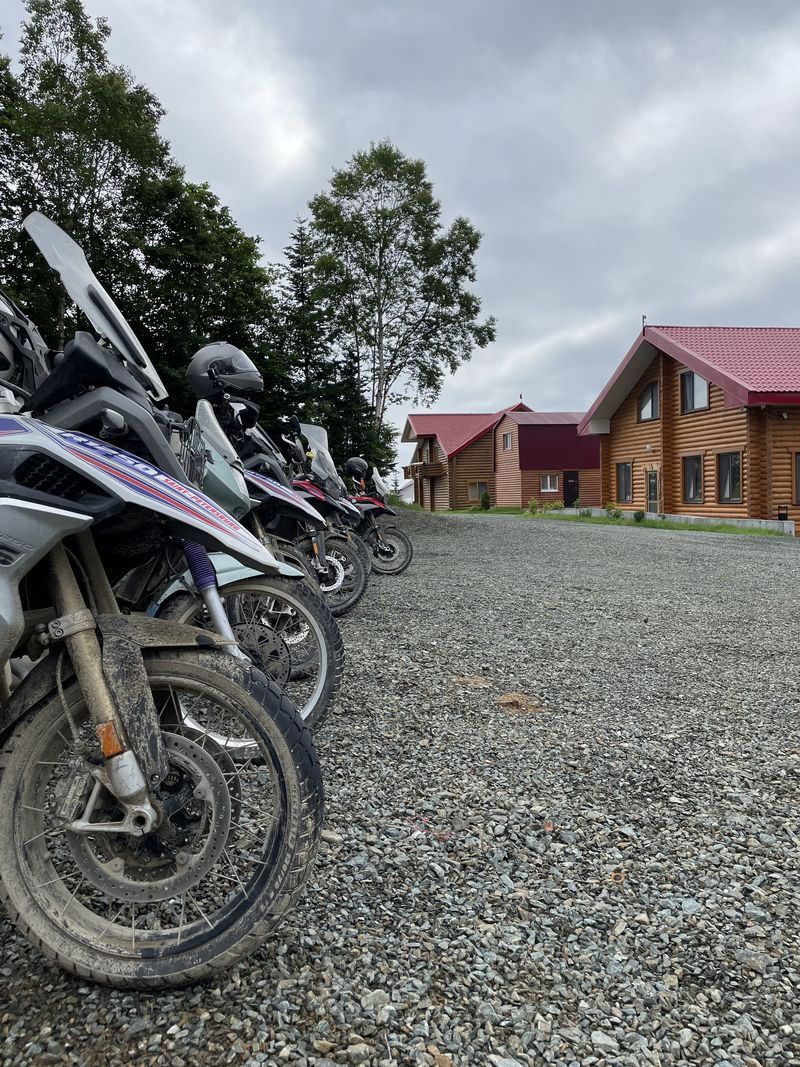 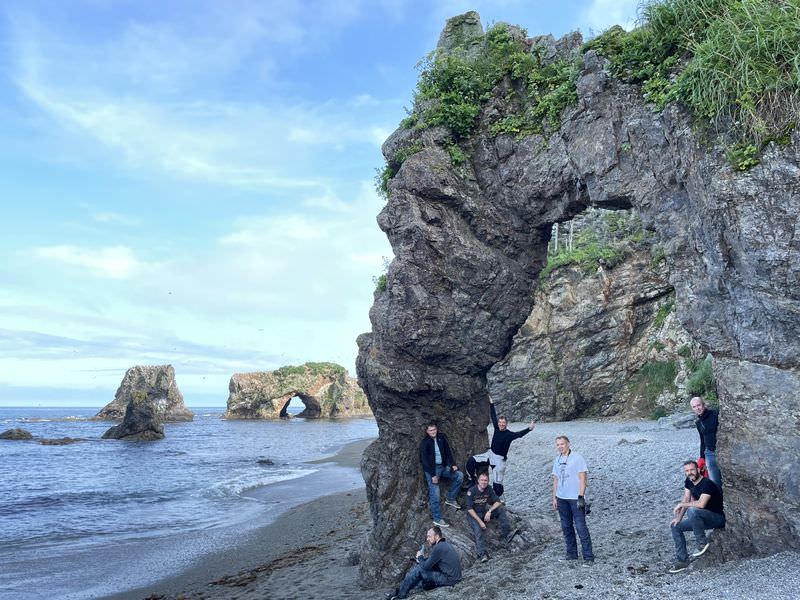 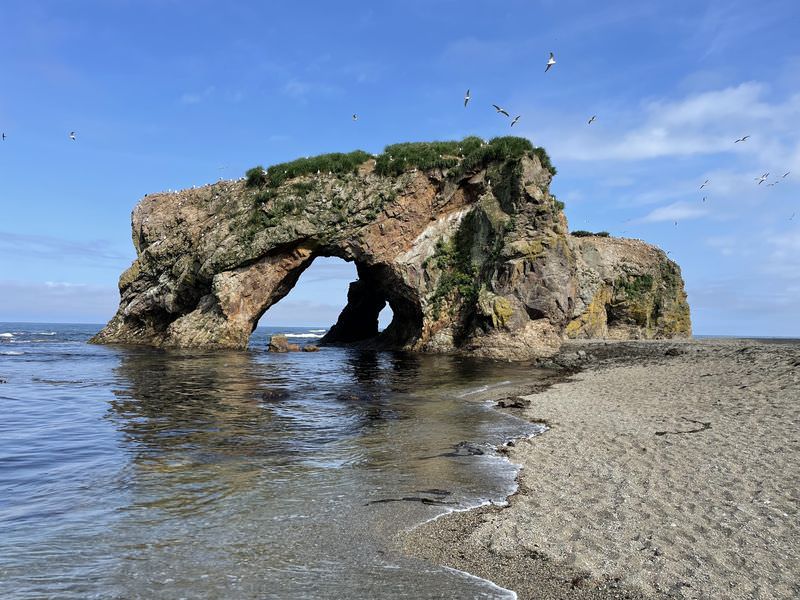 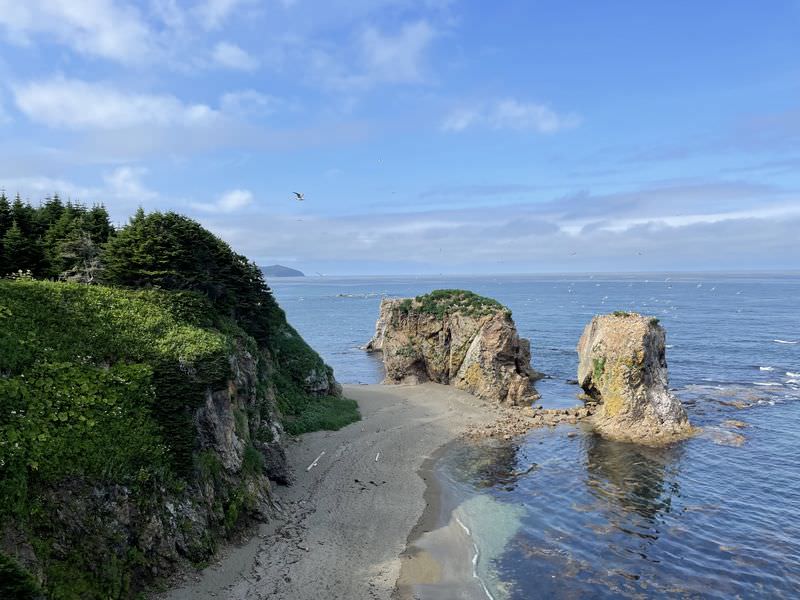 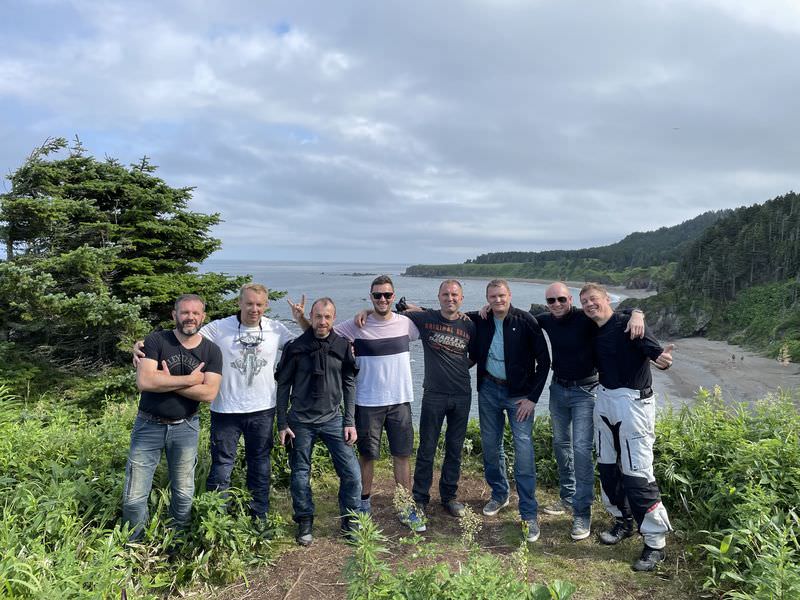 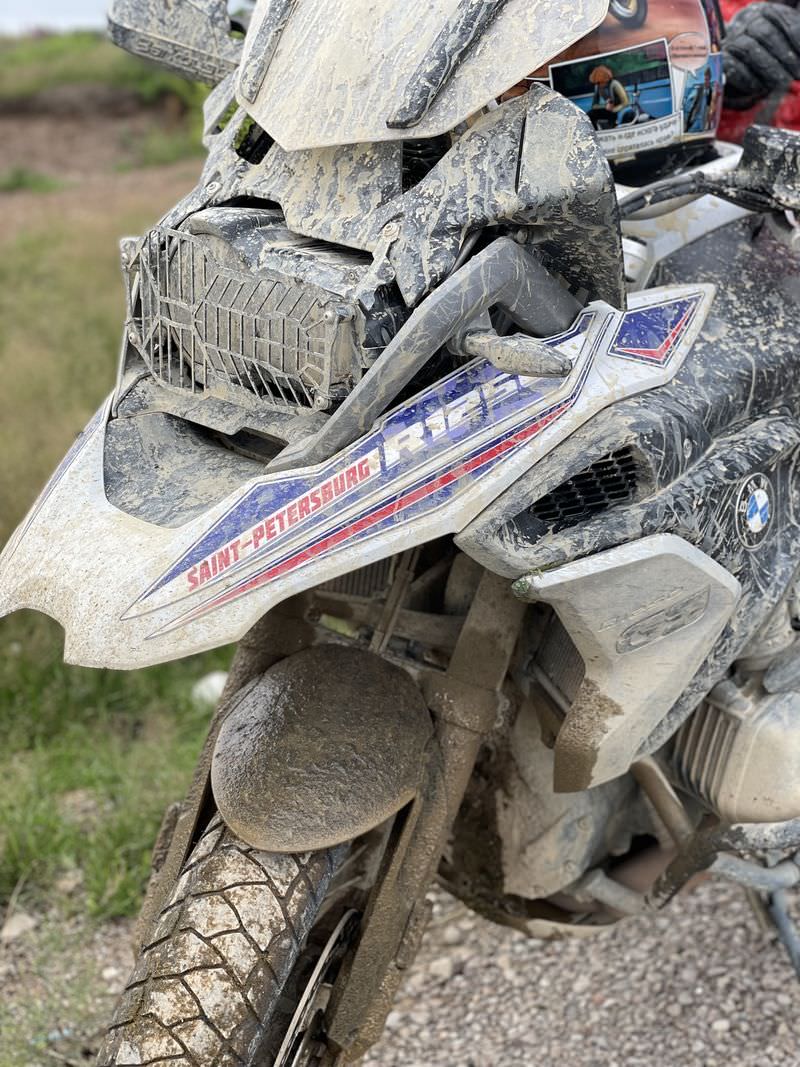 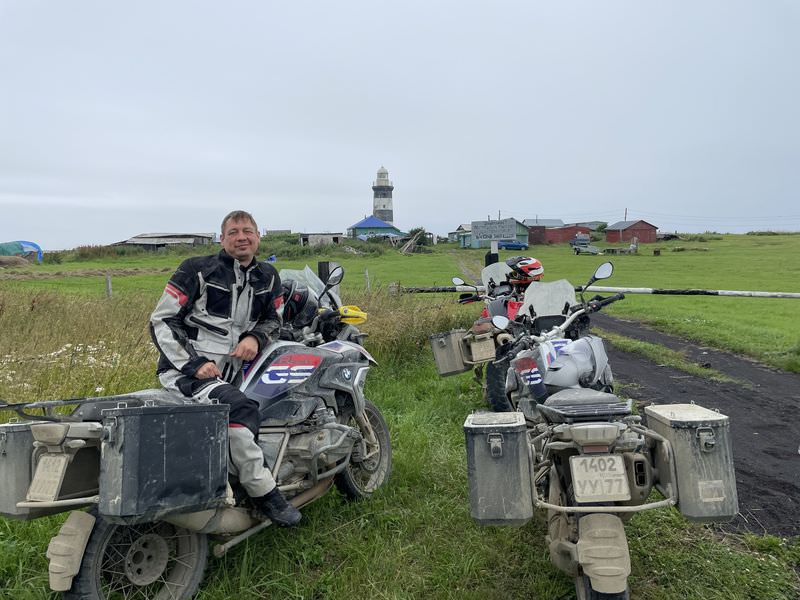 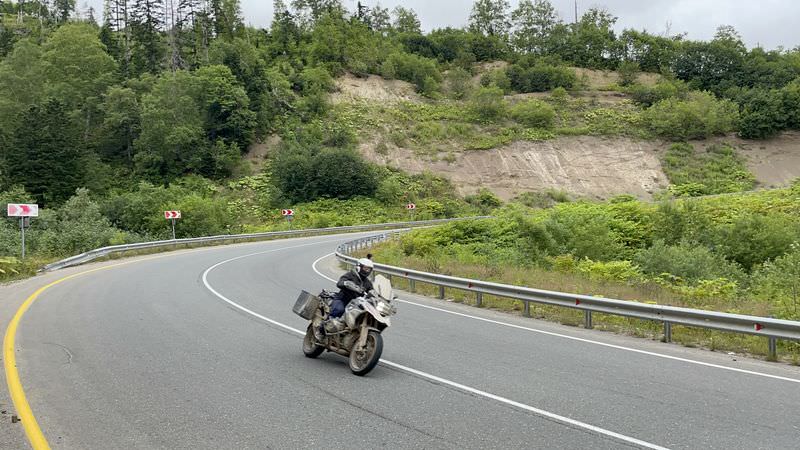 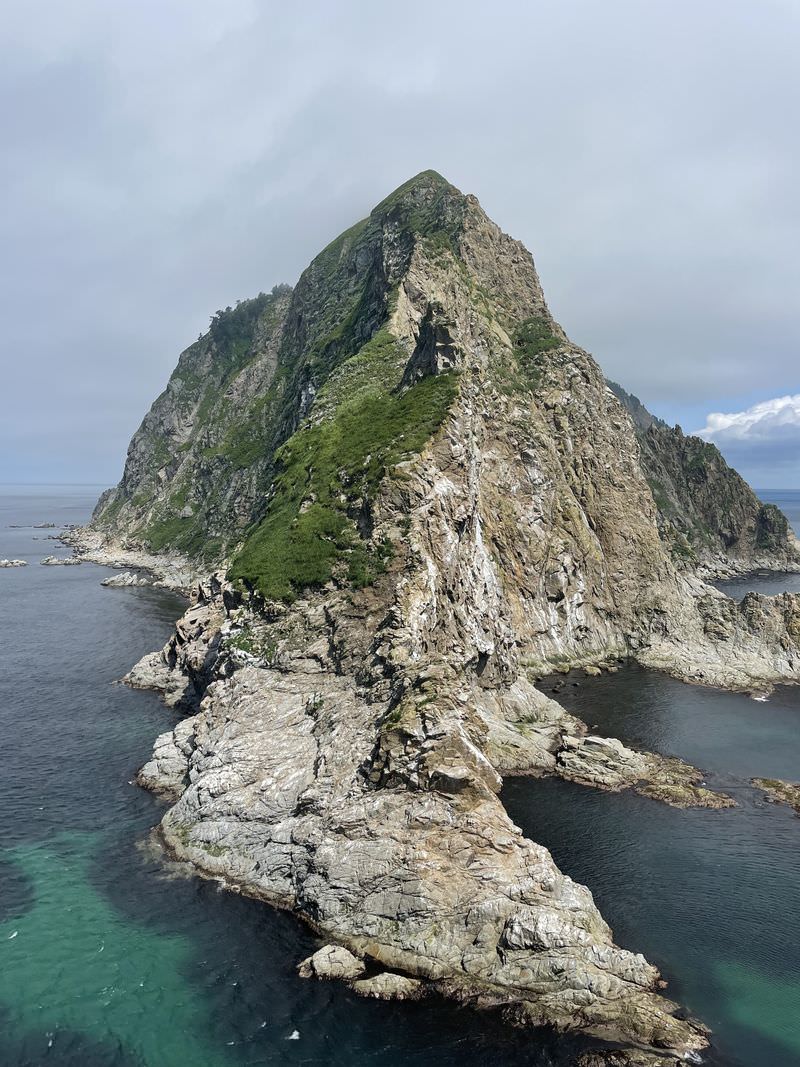 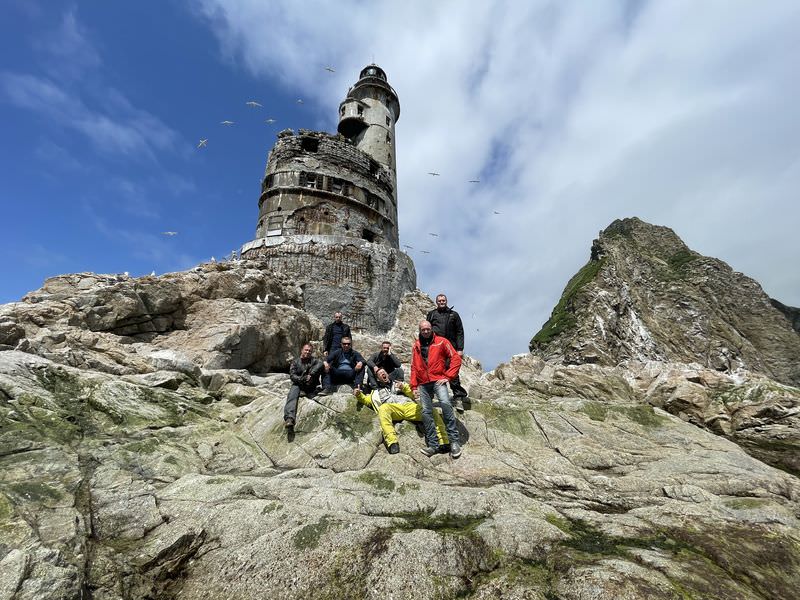 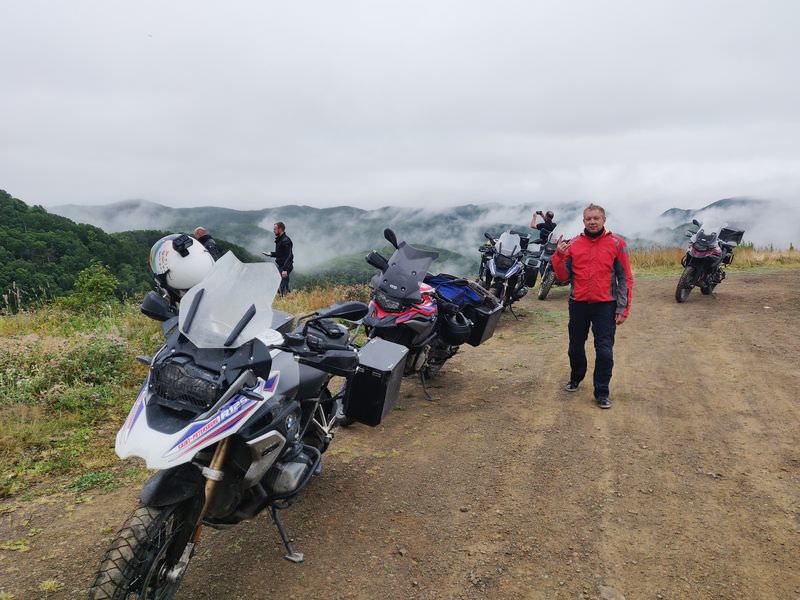 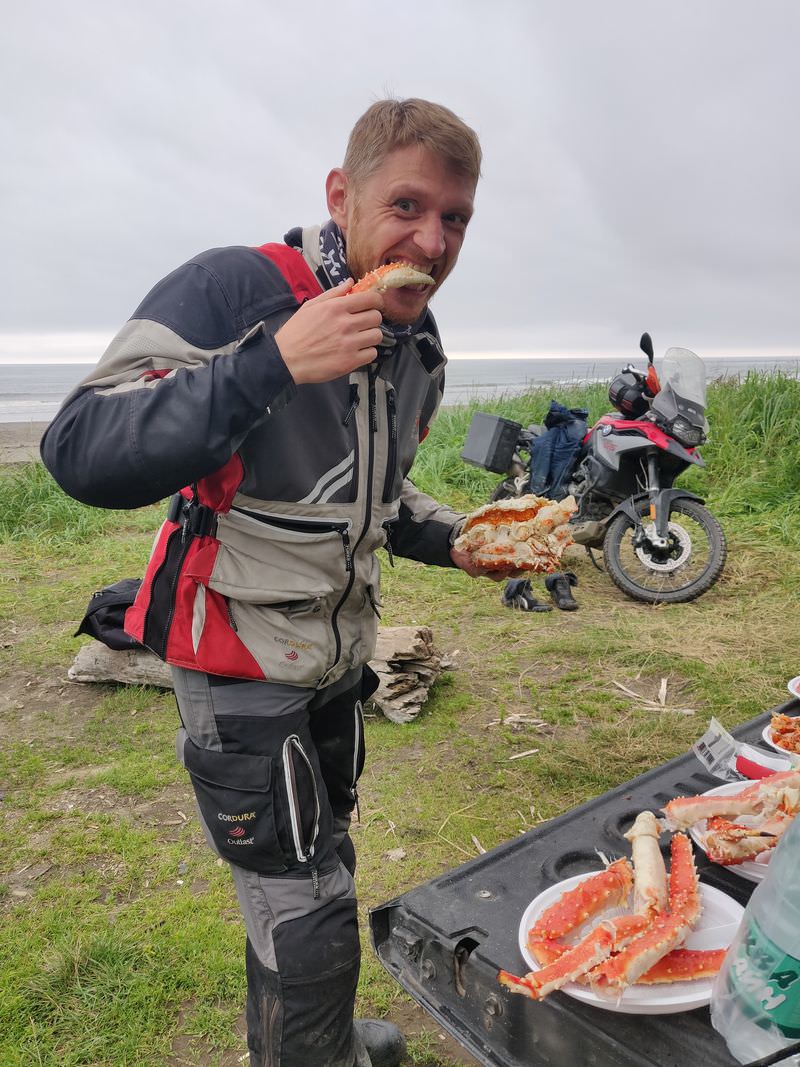 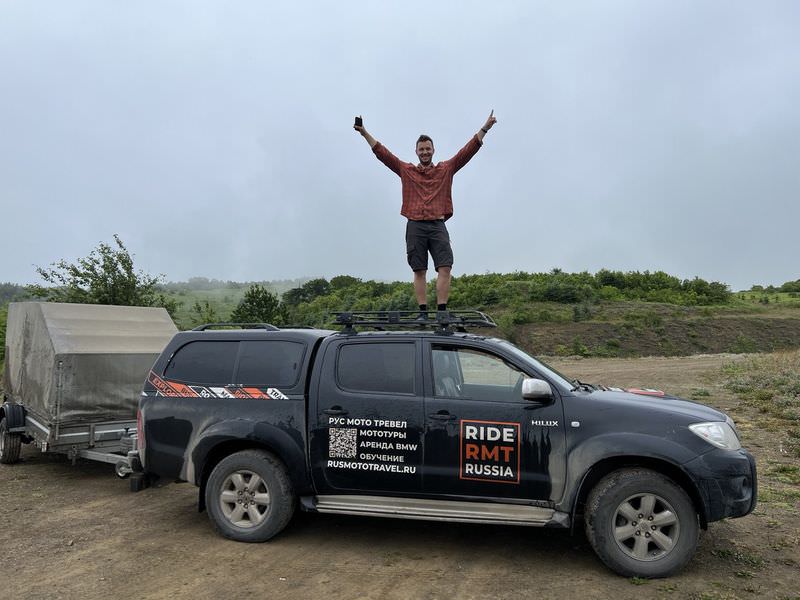 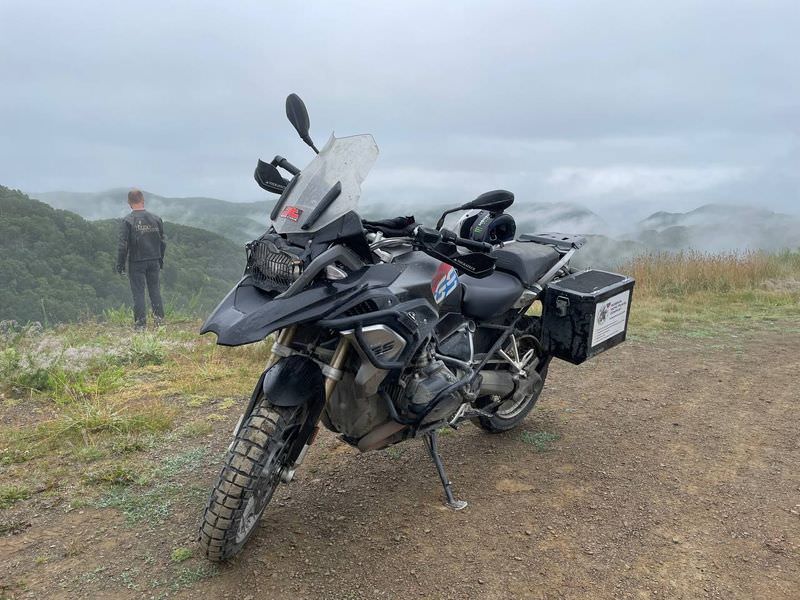 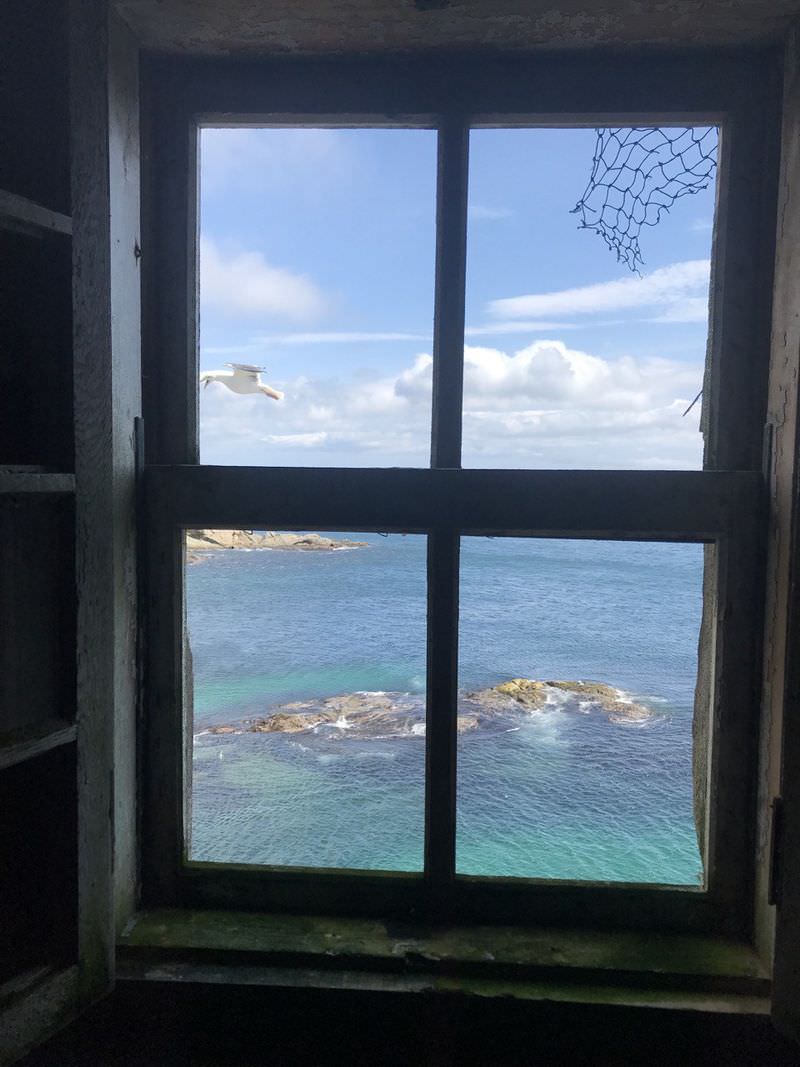 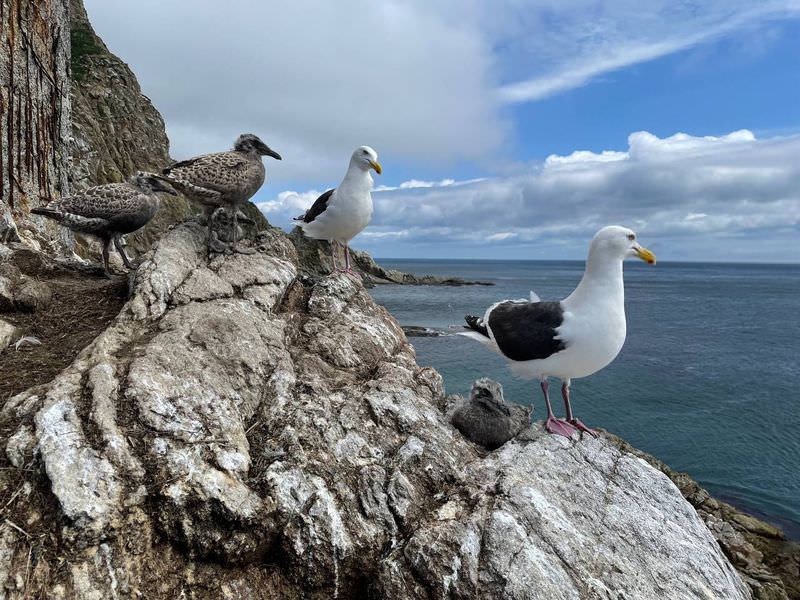 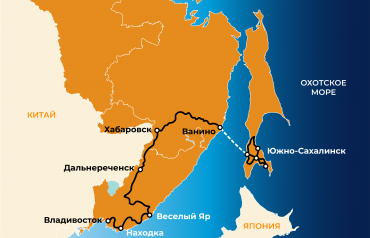